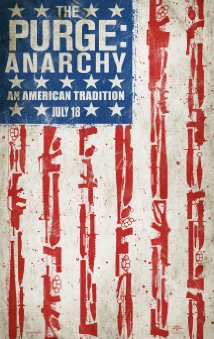 Just a year on from James DeMonaco’s original introduction to dystopian America’s annual all-night unleashing of the beast within, this fast tracked sequel sees the writer-director returning to broaden the scope of his original idea, exploring the consequences for a cross section of society thrown together on purge night. To put it another way, a bigger budget and digest of reviews of the first film has convinced DeMonaco to leave the confines of a middle class house and comment on the country at large. The result’s a more satisfying, if not quite more substantial movie.

Set a year on from the Ivy-League raid on Ethan Hawke’s family home, Anarchy partners a vigilante ex-solider with a mother and daughter from social housing stock and a fractious middle class couple, all tasked with surviving a suite of horrors on the unpoliced streets, including a trigger happy wronged wife, a gang paid to scoop up proles for filthy rich huntsmen and a small army who may or may not be sponsored by the ostensibly neutral government, tasked with eliminating unwanted and socially expensive undesirables.

In other words the second Purge is keen to explore the social and economic implications of the new founding father’s catharsis exercise. There’s even a militant rebellion thrown in for good measure, spearheaded by Malcolm X-style inspirationoid, Michael K. Williams. With a larger canvas and free of the environmental limitations that dogged the first film, Anarchy can therefore do more and say more than its twelve month old counterpart and for the a while it does, using the time honoured device of exaggeration to annotate social divisions in the good ol’ U.S of A.

Unfortunately the flat screenplay undermines the promise of the satirical setup and before long DeMonaco’s falling back on b-movie tropes – the rugged survivor, perfunctory gunfights and seedy Hispanics. That’s fine, if familiar, but the setups often lack invention and style, while the dialogue is strictly utilitarian. Anarchy’s premise is gripping, and DeMonaco’s story has enough momentum to keep us interested, but one wishes he’d developed his ideas instead of using them as seasoning, and thought harder about how each sequence might be executed with the wit and invention that’s notably lacking.

The mid-budget cast headed by a grizzled Frank Grillo try hard but are hamstrung by the placeholder status of their roles. If there’s to be a third Purge, one hopes DeMonaco will spend the next six months reviewing his early John Carpenter collection and noting how the old master of the down and dirty dystopian thriller used humour and a sense of the absurd to elevate the straight to video material to memorable status.

Certificate: 15 for ethnic cliches, a ban on humour, and CG blood.