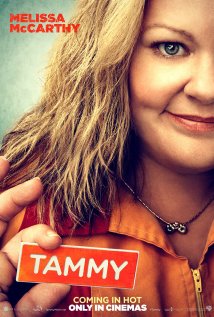 The best one can say about Tammy is that it is, in the very strictest sense, a movie. Ah, you say, thanks for the tip, but this isn’t as obvious a statement, or indeed as stark an example of damning with faint praise, as it may appear. If we compare Melissa McCarthy’s latest to say, Transformers: Age of Extinction, we see a notable contrast – a story that’s been thought about and plotted, a lead character invested with a small drop of psychological depth, shrewd casting – fuck, it’s even about something: growing up and the relationship between women. If that sounds patronising, it should: Tammy’s the reason that so-called women’s flicks are synonymous with mawkishness and thought termination. You see McCarthy built a movie but she forgot to make it interesting or funny.

They won’t put that on the poster.

This isn’t a comedy (a beat) that’s going to change many minds about its star. By now seasoned McCarthyphiles are resigned to the fact that the rotund funnywoman is content to make her weight and socially retarded shtick the joke. Tammy at least tries to suggest why the eponymous proxy for its star’s routine may be this way. It’s about a mollycoddled childhood you see, and abandonment issues.

Tammy’s a needy, lazy, infantilised fuckwit who treats the people in her life like shit, driving her husband into another’s arms in the process, yet we’re asked to like her. Do we? Sometimes. McCarthy shows a hitherto hidden sweetness in a handful of scenes, she unleashes a modicum of vulnerability on an unsuspecting audience. Would we rather have sharp one liners, drama and great comic setups? You bet, but that, McCarthy would argue, would be anathema to the sensitive human story she’s trying to unpack. When her screen Dad Dan Aykroyd was in his prime he could do both, but let’s not get into that.

So Tammy’s ultimately a dull road movie with an underwhelming main character, that tries to be more substantial by running a commentary on a dysfunctional working class family and a damaged id. If McCarthy had made us laugh we might have said this flick had heart; if the Lesbian party had been like the beach scene in Police Academy we might have stayed; as it stands, “dick and beak”, Tammy’s description of TopperJack’s chicken burgers, works as a capsule review. If there’s time and I can rouse a little enthusiasm I may write my own some day.