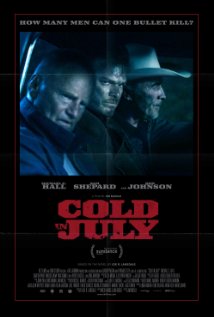 Jim Mickle’s tough little ‘80s-set thriller, adapted from a Joe R. Lansdale novel, starts off conventionally enough. Michael C. Hall, adorned with a period mullet, is awoken by an intruder. With a wife and child in the house he takes no chances and kills the burglar, only to discover his victim is the son of a recently paroled felon, who we infer, will now be eager for revenge. When a lined and malevolent Sam Shepard dutifully shows up and makes veiled threats about offing Hall’s young son, we think we’ve got a handle on what’s to come, but it turns out that the labyrinthine and psychologically dense Cold in July is just getting started: in short, the first act isn’t the half of it, or even a third. Before it’s over villains have become antiheroes, the story’s turned on its head and a hitherto hidden affinity between Shepard and his prey established. If every movie worked this hard to keep us engaged and surprised then the weekly pilgrimage to the multiplex would be a treat indeed: as it stands we’ll take this berry in a vat of gruel and count our blessings.

The ‘80s setting allows for a judicious drop of period grit; a conscious throwback to a time when indie movies had an edge, forged using conspicuous stylisation. A brooding synth score by Jim Grace and a climax that doesn’t skimp on coloured gel and filters, provides plenty of atmosphere, while the period setting isn’t mere indulgence, rather there to facilitate a plot point that hinges on an old technology put to sinister use.

Had Hall and Shepard been the only leads, this would have a very fine movie anchored by two committed actors, but thankfully Mickle adds Don Johnson as a no nonsense, wry private investigator, who gets involved once the story starts to turn. Oozing charm and sporting a “Red Bitch” licence plate, Johnson’s got enough brass to push the movie over the top and provide a little light relief as the plot tapes our mouth and takes us into the murky underbelly of ‘80’s Texas. We welcome the jokes; it’s nasty out there.

Boasting plenty of tension and intrigue, Cold in July is a punchy, well-plotted beast that takes you to places you wouldn’t have bet on at the start. In a world of predictable, seen-it-all-before thrillers, it’s very welcome indeed: the kind of movie that reminds you that making them like they used to needn’t mean recycling old stories.