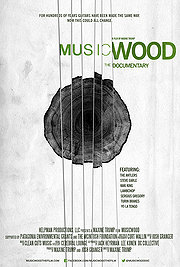 Seeing the Wood for the Trees

What would you be willing to give up to preserve the most beautiful hotspots on Earth for future generations? That’s the question that bedevils Maxine Trump’s Musicwood, a documentary with a unique line into the environmental debate, namely the use of increasingly rare wood to make the humble acoustic guitar: in effect, a test case for business and consumers the world over.

It’s a curious and highly thought provoking tale about the culture of entitlement, the economics of deforestation, activism and craftsmanship, that refreshingly inverts your initial expectations. Upon introducing the interested parties, namely the Native American corporation, established by statute to protect the landed interests of the indigenous Alaskan population, and the Guitar makers – American mainstays like Gibson and Martin – one might expect the former to be dead set against aggressive logging with the other camp only too eager to receive fresh spruce, part of a tetrad of increasingly rare woods (the others being Rosewood, Mahogany and Ebony) that make for a perfect plucker. Instead the reverse is true: the Native Americans seem intent on clear cutting, or chopping down every tree, to maximise the dividend for their shareholders, while the guitar makers, who in one of the story’s interesting juxtapositions, share a spiritual affinity with the wood, like those more circumspect tree huggers, Greenpeace, agree to form the Musicwood coalition to try and preserve the supply of their materials, even if this makes their business less profitable.

Of course the fight to preserve our temperate rainforests is a global endeavour but Trump keeps the focus tight on Alaska’s Tongass National Forrest, not least because it’s late to the party when it comes to the capitalist exploitation of resources (so salvageable) and the local politics illustrate the wider problem in microcosm (if such a term can reasonably be applied to 17 million acres).

What’s hard for the layman to understand is the doublethink that regulates the local logging business. The owner of Gibson guitars talks of being a custodian for a great American company, but acknowledges change in the manufacture of his product is inevitable. In contrast Sealaska, “a Native institution owned by more than 21,000 tribal member shareholders whose core cultural values guide all that Sealaska does” according to their website, act like any other corporation on Earth, thinking nothing of exploiting their ancestral land for maximum profit.

A local woman, moved to tears as she recalls the sight of irreplaceable trees passing by on cargo containers, calls the practice “liquidation” with no money trickling down to the local economy. Try to reconcile that with a spokeswoman who laments her childhood capitalist indoctrination at the hands of colonial westerners, and a company that hold ceremonies for newly fallen trees in which they bang drums and lay feathers, and your balls start to hurt.

Ultimately Trump’s documentary serves as both a valentine to the acoustic guitar and the dedicated people who make and play them, and a warning about the sacrifices they’ll inevitably have to make to preserve what’s left of biodiversity in some of the most eye widening places on the planet. One takes from the film a great deal of respect for the music men and women who realise that, despite the spiritual connection they have with their instruments, some things must be more important, and disdain for the hypocrisy and short-sightedness being practiced by Native Americans who should know better; a company not just destroying nature’s beneficence to all of us, but their own historic way of life. After all, whatever the law says the planet is no one’s property, just everyone’s home. As a visibly agitated Greenpeace activist puts it, “the only thing that fucking matters is the forest” and that, you feel, is the crux of it.