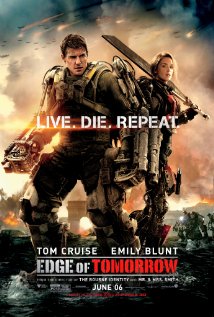 The Alpha Male and Omega

Warning: This review discusses the film’s ending. Don’t read on unless you’ve already lived through a screening of this title.

The best compliment one can give Doug Liman’s sci-fi war movie is that it’s very well conceived. It’s appropriate that the alien invaders of the piece should be called Mimics, as the down and dirty industrial aesthetic and in-story techno fetishism mirrors the film’s highly proficient, military-grade efficiency, powered by all the tools in the modern filmmakers arsenal. Just as the story pivots on advance planning and variation in order to advance, Liman and screenwriter Christopher McQuarrie employ the same strategy to maintain the movie’s momentum.

Time travel’s a problematic device as it can be the enemy of internal logic, but here, despite a modicum of head scratching when the exposition finally comes and an ending that gives you pause, it’s straightforward enough, liberating the film, in its own World War II parlance, to explore the themes it’s borrowed from Groundhog Day; a flawed character who matures while stuck in his time loop, his changing feelings for a woman he gets to know over many iterations of the same day, the empowering notion that we’re each ultimately the masters of our own fate, regardless of how pernicious a lie that is.

Those on Tom Cruise watch who’ve noted that the actor’s last few movies, Jack Reacher, Oblivion, have featured his fifty one year old hands on female flesh some twenty years younger, will groan when noting that he’s at it again here (an in-story justification not withstanding). The difference perhaps is that Emily Blunt, introduced many times over with a highly sexualised body movement, is the leading man’s equal in narratological terms: a war hero as the movie opens, whose prowess on the battle field and courage far outstrips the Crusier’s spineless PR man, forced to participate in a futuristic reprise of the D-Day landings. Of course Blunt doesn’t open a movie, more’s the pity, so it can’t last nor does it. Cruise’s character, forced to relive the same day over and over again, gets tougher and more lethal with Blunt’s help, eventually forcing her into a subordinate role. Once he’s suited up as hero, Blunt ceases to be the woman who can save Cruise, becoming someone he’s determined to save. You know it’s coming but can’t help reflect how unfortunate it is that Liman and co. didn’t find a workaround.

Nevertheless Cruise’s transition from propagandist, all teeth and plastic charm, to hardened war veteran is well handled. The constraints of the premise don’t permit any other character to enjoy an arc per se, but despite this his relationship with Blunt progresses via variation and memorised snippets of biographical insight carried over into subsequent loops. Two characters we care about, forever in extremis, is a good formula for any movie, but it gives this war flick heart; important else it might have been devoured by its impressive spectacle and highly kinetic setpieces. All You Need is Kill was the title of Hiroshi Sakurazaka’s source novel, but in a movie like this one all you really need is a human story to temper the slaughter, and Liman’s film achieves that, plus a judicious drop of time-bending intrigue.

If the ending doesn’t quite make sense, the suggestion being that in the final loop the effect from the previous one has carried over, despite events resetting and Cruise no longer having caused those events to happen (shouldn’t the clock either tick on from the Parisian climax or Cruise have to do it all over again?) – giving it a deux ex machina quality – that shouldn’t entirely detract from the fact that for 111 of its 113 minutes, Edge of Tomorrow’s a smart and grandly mounted blockbuster with plenty of war-fetishsizing thrills. Now if only we could find Tom a leading lady his own age…

Certificate: 12A for keeping your female co-star down, a largely bloodless war and the only three people left in London being wizened cockneys.