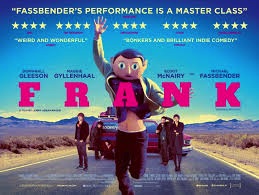 Chris Sievey’s Frank Sidebottom was a quirky comic character with delusions of grandeur, who broke through to radio and television thanks to the performer’s zeal and the gimmick of donning a giant spherodial papier-mâché head. Now the character’s inspired a Lenny Abrahamson directed film but weirdly, the message seems to be that there can be no place for an outsider like Frank in the mainstream, that such a man would be a frustrating curio to an audience, proxied by the wet and guileless Domhnall Gleeson: a character who finds the world of Frank and his band of misfits, Soronprfbs, ultimately inaccessible, despite his best attempts. That you may think, is an odd tribute to a comedian who successfully connected with people, from a movie that proves the same by existing.

The fictional story comes from Jon Ronson, the writer, journalist and one time witness to Sidebottom’s musical exploits. Gleeson’s character, also named Jon, is clearly a vehicle for those memories. One hopes that Ronson wasn’t as wishy-washy as his on screen counterpart but regardless, the portion of the film with the frustrated songwriter interned in the Irish countryside with his oddball bandmates, is undoubtedly the highlight. There’s plenty of quirk, a strong anarchic energy to this act, but underpinning it all is a sense of Gleeson and the audience he doubles for unable to gain any purchase on what is fundamentally a commune of damaged characters, melodically medicating their mental illness.

Was Sievey, the movie’s inspiration, mentally ill, a dispossessed loner locked into a series of unhealthy, self-harming relationships? What would his family and friends make of that I wonder? Of course this isn’t Sievey’s life story, just a strange fictive spin-off from his famous persona, so one wonders why Ronson chose to cannibalise his experiences this way, turning a showbiz spoof into a morbid study of delusion, anomie and an impenetrable miserablist subculture? When Gleeson’s character walks away at the close, content that these defectives can only survive in each other’s company, ill-suited to the spotlight, ill-equipped to handle the judgement of the mass, are we supposed to feel moved? Imagine a fictional biopic of Alan Partridge that culminated in the “Steve Coogan” character hanging himself. Perhaps Sievey would have appreciated the punk sensibility behind that approach but surely not Frank’s inability to connect with anyone, outside his troupe of broken bandmates?

We’re left with a take on the Frank persona that rejects biography in favour of literalising the backstory Sievey gave him. So in this version he is unsuccessful, he does live with his parents, he doesn’t have any discernable talent. In short, there’s no story there. Far more interesting would be the man behind the character – the tryer and entertainer who improbably got a foothold in a difficult business on personality and left field creativity alone. That, you feel, would have been a worthy tribute: the brain underneath the head. Instead, Frank pulls off the bulbous bonce to reveal a headcase: a character with no hope and no ability to reach out to others. Perhaps Ronson and Abrahamson should have foregone this tribute and simply sent a condolence card to Sievey’s family instead.

Certificate: 15 for use of hashtags, a central character that you do indeed wish to punch in the face and being trapped in Ireland for a year.