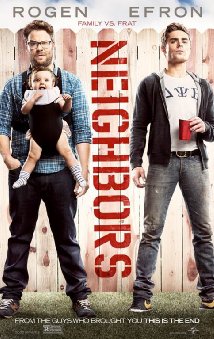 Nicholas Stoller’s film pits a couple with a newborn baby, Seth Rogen and Rose Byrne, against Zac Efron’s frat house, but, perhaps because Rogen isn’t comfortable playing anyone who isn’t a schlubby, stoner-type, his new Dad wouldn’t be out of place at the house next door. That goes double for his good-time wife, Bryne, who’s equally hedonistic and addled by what we imagine to be a half-lifetime of joint sucking.

Listening to a bunch of kids do their crude, hyperactive, shouty shtick would be tiring enough, but when your main characters are just as infantile, the result is a film that’s a real test of endurance. How much rabid banter can you take? The joke is that both parties are as idiotic and immature as each other, Byrne and Rogen’s reluctant responsible adults gradually converted to parenthood when confronted by the personfications of their youth next door, but it’s a gag that requires a lot more subtly and wit to work than you’ll find here. Everything’s funny in moderation: hysteria, stupidity, gross out humour – but 96 minutes of it is exhausting. Every character in Bad Neighbours is on, all the time, and consequently there’s little of the stuff that makes a movie a movie: heart, pathos, little moments of character – the stuff that ‘80’s comedy titan John Hughes did so well.

Instead, in a largely mirthless flick, you’ve got jokes about milking Rose Byrne, a woman wearing an erect penis as a choker and a baby eating a used condom. The inescapable conclusion is that this is a movie made for Rogen proxies: men off their gynecomastic tits on weed. If that’s you, you’re likely to find this tartrazine-fuelled comedy lung-bursting. Everyone else, watching without the benefit of stimulants, will lament the waste of a good set up and wonder if we’ll ever again be treated to a comedy that grafts the jokes on to a human story instead of pushing them up front and jettisoning everything else. The result is like a house without its foundations – shaky and unlikely to stand the test of time.

Certificate: 15 for Rose Byrne's veined breasts, Phoebe from Friends and the waste of a Die Hard reference opportunity.