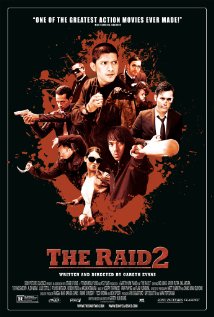 The unlikely pairing of Welsh director Gareth Evans and Pencak Silat, the Indonesian martial arts, produced a hit a couple of years back, when Iko Uwais spent a movie’s running time brutally killing drug lords in a Jakartan tenement. The Raid was an impressive piece of orchestration, brutal and well choreographed; the only bum note being the movie’s dearth of humanity. The temptation for Evans must have been to make the same movie again but, perhaps aware that his breakout hit was more concept that story – “a man fights his way to the top of a tower block full of killers!” – The Raid 2 aims higher, splicing a revenge thriller with an undercover cop movie and adding Godfather inspired internecine warfare between two feuding crime families for good measure. This, unlike its predecessor, is a story we can invest in; a story soaked in tension. Psychopaths need not worry though: Evans has designed his movie to facilitate one extended mini-massacre after another. There’s plenty of violence for the whole family.

That violence is highly kinetic, gory and long form; a flurry of swoops, punches, torso puncturing, throat tearing, ligament splicing, skull crushing, limb snapping and defenestration. As before, Evans clearly relishes the freedom that comes with Indonesian patronage and he’s exploited it here to the Nth shade of crimson, upping his game in terms of placing his camera and keeping the operator in the fight, while issuing a firm rebuke to action directors working in America who’ve allowed a ratings driven system to sanitise their in-movie mayhem, robbing it of edge and impact.

If Evans’ technique recalls the Hong Kong cinema of old, so much the better: it’s high time we felt the punches again, and in Iko Uwais the director certainly has a leading man who has the physical dexterity to administer them, if not the charisma to turn a mechanically robust action picture into a movie with an emotional afterlife. Arifin Putra as Uco, the hotheaded son of crime boss Tio Pakusadewo, is better suited for the job; an antagonist with both an arc and an aura of danger. He’s a taste of a Raid that could have been great instead of good, had Evans been minded to apply more shading to his characters rather than carefully placing them as obstacles to be kicked over when necessary.

This is a problem because Evans’ story, which aims for the scale of the aforementioned Godfather, can’t hope to complete with that benchmark because the characters aren’t nearly as rich or varied as those in Coppola’s saga. When a story can’t quite engage on a human level and is reliant on impressive human pyrotechnics to propel it forward, a running time of 150 minutes is excessive. That’s frustrating because Evans has put the architecture in place to make a more substantial movie but in the end delivers one that’s more engaging, which isn’t, alas, quite the same thing.