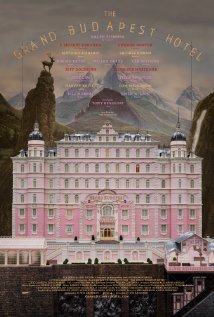 As intricate and artful as The Grand Budapest Hotel is, one wonders if Wes Anderson will be content to have it canonised as a bravura chunk of pastiche. If we close our psychical iris and focus on the film’s appropriation of time stamped aspect ratios (1.33, 1.85, and 2.35:1 if you’re interested), the static camera with infinite depth of field, vertical tracking shots, precise ninety degree pans, fixed zooms, blocking and mise-en-scene calibrated to draw the eye to the centre of each shot, conspicuous miniature backdrops and in-camera model effects, we see a movie that’s beautifully made but brain achingly self-conscious. Where’s the vitality in a film this affected?

Anderson covets a bygone era of theatrical, constructivist filmmaking; an age when European and Russian directors, the pioneers, were aesthetes not just technicians. He longs for the days when a still embryonic art form looked to literature to help structure its stories and lend them some narratological heft, the romance of the novel that a crude by comparison photographic medium couldn’t replicate without referent.

Today we know that film can be as haunting, as meditative, as great a spur for the imagination as the written word, so post-modern flicks like Budapest Hotel are interesting throwbacks; they suggest that for some directors there was no greater time that than the late ‘20s and early ‘30s: an era when Germany and Ufa led the way until Hitler hijacked the great machine in 1933. Indeed Anderson’s film was made at Babelsberg Studios. We could call it method filmmaking. We could also write to Anderson and suggest he find his own voice, develop something new, something 21st century modernist, something for the cineastes of the 2070’s to homage, but such a letter, handwritten and wax sealed naturally, might fart into the atmosphere of self-congratulation that permeates the project.

Indeed so insecure is Wes, so worried that critics may not embrace his use of classic technique and recognise it as something akin to great art, that he’s seeded his desired verdict with the same care devoted to the content of and movement within each scene. In Mendl’s ornate cakes, “the best”, the finely crafted treats that prison guards dare not pick apart, for they’re so very choice, he gifts unto us the perfect metaphor for the film entire. Film hacks the world over will see that thing of beauty, in its perfectly presented box, and say “that’s the movie right there”, and congratulate themselves for noticing it.

But Wes isn’t quite sure that will be enough so he’s given us a few lines of dialogue to seal the deal. “She likes you”, says the Lobby Boy of his girlfriend’s verdict on Ralph Fiennes’ Gustave, a comic dandy whose succeeded in divesting the film of Moonrise Kingdom’s whimsicality. “Good,” he replies, “that means she gets it.” Film journalism hacks take note. Then later, at the end, Anderson puts these words into F. Murray Abraham’s mouth, eulogising both Gustave and himself: “his world was over before he entered it but he did manage to sustain the illusion with magnificent grace.” For providing a decadent and lip curling ninety-nine minutes, with detail to spare, I hereby pay Wes Anderson the compliment of closing with that bit of critical shorthand, just as he hoped.

Certificate: 15 for cat death, bad art and "Gunter was slain in the catacombs".