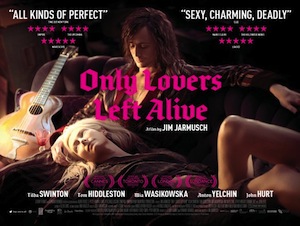 The alliance between Vampirism and young adults has, of late, threatened to sully the predators’ good name. Who better then, than indie oddball Jim Jarmusch to reclaim the blood suckers for adults? In the sumptuously meditative, oft cerebral and mordantly funny Only Lovers Left Alive, he reworks the tropes of gothic horror with splendid quirk. It’s romantic, sardonic and literary and like many of the best movies, very little happens. No wars, no prophesies and no hormones, just romance divested of sentiment or cliché. That’s right, this is the movie we often wish we’d seen in place of the gruel served up for our tired eyes.

Tom Hiddleston’s vamp musician, described by an undead Christopher Marlowe (yes, that one) as “a suicidal romantic arsehole”, plays a former peer of Shelley and Byron (and ghost composer for Schubert), who’s on a prolonged downer on humanity, hauled up – where else – in the dilapidated, dying rock city of Detroit. There he contemplates ending it all with a custom made wooden bullet until long time lover and book worm Tilda Swinton, presented here as a tactile albino, flies over from her vampire bolt hole in Tangiers, to give some much needed company to her reclusive beau.

The question of why these lovers would be apart at all, is just one that Jarmusch ponders in his idiosyncratic treatment of a relationship distended over many centuries. This is a story that’s dared to think about the consequences of longevity and what such a long life span would mean to romantics like Hiddleston, who’s had perhaps too much time to contemplate his lot and his status as an interloper in a human society he doesn’t much care for. Swinton’s elegant and wise companion is therefore the perfect corrective. There’s still a glint in her eye. Watching these two tired brains mix historical anecdote and philosophy with a drive by of Jack White’s house and a visit to a gig in a Detroit bar, is one of the year’s great pleasures. Consequently one shares Hiddleston’s frustration when Mia Wasikowska’s unwanted houseguest, the child-like, Gremlincentric sister of Swinton, arrives to upset the equilibrium.

Jarmusch’s film is sumptuously designed (you could spend your life happily rummaging through the historic bric-a-brac in Hiddleston’s home) and invested with elegiac asides, including the wonderful notion of vampires temporarily broken from their lament with a shot of decontaminated blood, filmed like the bored heroin addicts of Danny Boyle’s Trainspotting enjoying a long overdue hit.

Trust Jarmusch to eschew cliché and think about the vampire condition – their lives, their loves, the advantages of accumulating vast repositories of knowledge and the disadvantages inherent in being a hidden species that can’t apply it as their human neighbours do. He’s created a charming mood piece with wit and warmth to spare, yet it will be largely unseen while millions ravenously consume the boiled gristle that is Edward and Bella. No wonder Hiddleston’s depressed.