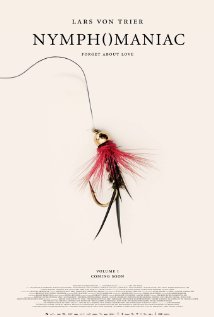 No Pain, No Gainsbourg

Note: This review covers both parts.

Let’s give Lars Von Trier his due. He’s not afraid to challenge his audience. He confronts them with everything that’s disgusting about the human condition. He picks your scabs. Now let’s take back some of that due. Von Trier’s films are conspicuously designed to provoke; there’s something obvious in their architecture. Von Trier builds brutalist towers next to Grade I baroque structures and invites you to note the act of desecration. But movies tailored to shock seldom do; one has to feel the filmmaker saw the beauty in their beast. Nymphomaniac is an ugly film, not least because it feels laboured and insincere. “I feel nothing” says the titular fuck addict as the first two hour ‘volume’ closes and we understand her frustration all too well.

Stellan Skarsgård finds a beaten and bloody Charlotte Gainsbourg in an alley, takes her home and so begins a four hour conversation the likes of which no two humans have ever engaged in or imagined, with the possible exception of sleep deprived psychoanalysts. When Virginia Woolf, no friend of the cinema, lamented the unnatural alliance between the then burgeoning art form and her beloved literature, even she couldn’t have envisioned Von Trier’s gambit: to have a character consciously break their oral history into chapters, as no living breathing person does, in order to add a layer of gravitas, of the kind ascribed to the written word, to a pair of pictures deficient in the same.

One can free associate, the director offering an abstract and intellectualising take on the libido, one can even tether catholic guilt to an atheistic, proto-fascist heroine, but what an audience demand of a film with a fist up our sexuality is truth. Instead, Von Trier offers a treatise on desire that reads like an alien’s attempt at reconstructing the human sexual experience many thousands of years after our extinction. It’s possible to imagine Von Trier’s never masturbated, that he’s still thinking about the precise application of pressure to phallus, the optimal rhythm, the perfect temperature for pendulous balls.

Nymphomaniac appears to offer the lip moistening possibility of a film that’s interested in the female gaze for once; the stuff that gets the bevaginated half of the species (known to most filmmakers as Morlocks) horny. Sadly Von Trier’s a prisoner of his sex and it shows. Having spent four hours coding Stacy Martin and Gainsbourg’s Joe as a man, from the obvious, her name, to her crude objectification of the opposite sex, polygamous bent, dismissal of love as trite and sentimental, and her sympathy for sexual deviants (including paedophiles), the director affects to retrospectively reposition the movie as a feminist tract: a coda that might have convinced had the deliberately languid pacing not given us oodles of time to study all that came beforehand.

Can we believe Lars when he suggests it’s all about emancipating the vagina and marking the cocks as hypocrites, including their latent fear that secretly some women may think like men? Not if his camera’s anything to go by. A simple find and replace approach to male/female patterns of sexual behaviour would make no compromises when appropriating the feminoid gaze. But whereas Lars is happy to linger on breasts, nipples, Stacy Martin’s comped-in clitoris and Gainsbourg’s stunt pussy, the penis, though afforded far less protection than we’re used to on the big screen, is granted a more fleeting role. The cuts are a little faster when handling the male member, the mise-en-scene more obstructive, the camera less static, prone to darting around in case, heaven forefend, we got a good look.

As the movie continues, set in a strange affected Britain, where the indigenous characters sound either European or American, and mispronounce their own words, producing speech farts like “lav-a-tory” and “math”, the thought crowns that Von Trier sees women as an enabler for his own fantasies. He’s a like a man who invites his girlfriend to a party so there’s someone on hand to photograph him surrounded by other women. It’s enough to make you feel dirty, helping to fortify this rice paper ego.

One can forgive anything but boredom at the movies so it’s a regret that Nymphomaniac feels such an empty and often pretentious affair. It’s beset by strange casting decisions, not least Shia LaBeouf and Christian Slater as English characters, and stranger attempts at moral philosophy and understanding. Moments of self-deprecation fall flat, such is the scale of the self-indulgence. Ultimately it’s very hard to escape the conclusion that Von Trier’s epic is a lot of Shia and fucking, signifying nothing.

Certificate: 18 for Shia LaBeouf's English accent, watching Christian Slater die for 15 mins and the casting of a fishing line designed to look like a stream of ejaculate.