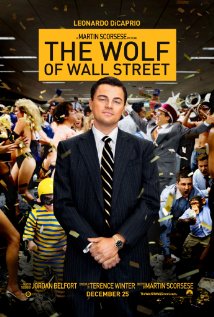 There’s no question that some of you will despise The Wolf of Wall Street. For a moment let’s pretend I understand that reaction. We’ve been conditioned for the longest time to believe, in film and literature, that characters should be sympathetic and stories should find their way using a moral compass. It’s what the critic James Wood once described as “a contagion of moral niceness”; an orthodoxy that demands we condemn the disgraceful, watch the wicked get their comeuppance and see the sinner redeemed by adopting virtue. So beat your chest and snort cocaine from someone else’s, because at last we have a great movie about depravity and greed in which the protagonist/antagonist survives three hours of story without a single, discernable scruple. Jordan Belfort is not a better man at the end of Martin Scorsese’s film. God help you, you’ll have to decide whether you approve without the filmmaker’s help.

Can it really be a surprise that Wolf is a study in excess with a blank sheet where the conclusion should be? Not really. It’s funded by former investment bankers, Riza Aziz and Joey McFarland, and retold using the wealthy hardons that populate the movie industry, itself a hotbed of greed, immaturity and egomania. In fact it’s reasonable to assert that had Belfort got the bus to L.A instead of New York, there’s every chance he’d have ended up becoming a full time movie producer instead. He clearly thought so too as he later dabbled, executive producing Hulk Hogan action comedy, Santa with Muscles. After watching Scorsese’s movie you may think this unlikely flirtation with the big screen was a scam to launder some stolen cash. The thought Hogan’s movie may be legitimate is too awful to contemplate.

By any conventional yardstick Scorsese’s fifth collaboration with Leonardo DiCaprio is reprehensible. The treatment of misogyny, drug use, profligacy, hedonism and criminality is uncritical; it’s a film narrated by a sneering crook and self-proclaimed “former member of the middle class”, that refuses to make notes in the margin. Kyle Chandler’s investigating FBI agent, a man we’d normally expect to win the moral victory in such cases, is resoundingly mocked by Belfort for his meagre salary and subway trip home with Joe and Jacinda Public. At movie’s end, at the point he should be celebrating, he’s making that journey and surveying the carriage, defeat etched on his face.

Yet Wolf of Wall Street often feels like the best party you’ve ever attended. How can it be this and depraved, you say? Well the answer mirrors an early scene in which Belfort, on his first day as a trainee broker, is taken to dinner by old hand Mark Hanna, a memorable and near movie stealing turn by Matthew McConaughey. One meal with the charismatic and apologetically unscrupulous Hanna is enough to destroy Belfort’s moral centre. Monogamy, sobriety, legality: all gone is less time than it took you to read to this point. What Hanna does to Belfort, the movie does to us. We’re invited by a mischievous Scorsese to identify with a bad man and go along for the ride. The calculation is that once the film’s over and you’ve crashed you’ll start to feel guilty, asking yourself searching questions about what happened in that cinema. It’s this challenge to the audience’s virtue that’s frightened the movie’s detractors.

A story with a principle character this confident requires equally bold direction. Cue Scorsese, who orchestrates with an assuredness unseen since the days of Goodfellas. It’s not the equal of that film, it’s inevitably limited by the narrator’s lack of depth, but there’s no denying the pace, pizzazz and virtuosity that the veteran filmmaker’s added to the enterprise. And who but Scorsese could get a performance this complete from the penny stock that is Leonardo DiCaprio? The director’s fascination with the actor is a kind of myopia; he clearly believes him to be better than he is; but on this occasion he’s almost cultivated his leading man into a performer we can believe in. DiCaprio’s pushed to his limit here; energetic, comedic and relaxed; but only the president of his fan club would argue against the proposition that substituting Leo for someone like the briefly glimpsed McConaughey might have pushed this hugely enjoyable movie over the top.

You can have too much of a good thing; the film feels fractionally overlong at three hours and would have benefited from a touch more discipline in the editing suite, but boredom’s never really an option in a story that’s alive with sex, cocaine and barmstorming comic setpieces. The only false note is the film’s confused chronology, ostensibly charting Belfort’s life from 1987 to 1994 (according to time marked in dialogue) yet featuring anachronistic phones and mentions of the Internet stock bubble. Was this a mistake or does the time displacing effect of so many drugs extend beyond the big screen? Who knows but it’s great fun while it lasts. Anyone else for jerking off?

Certificate: 18 for a good performance from Jonah Hill, The Equalizer and the best joke about Israel ever committed to celluloid.