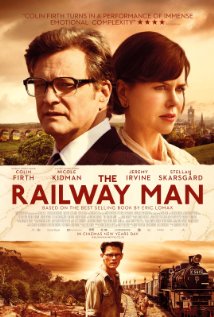 Going off the Rails

Jonathan Teplitzky’s film about post war redemption and reconciliation, written by the man who wrote the disjointed scenario for the London 2012 opening ceremony, is a true life story told with great economy and heart, that in keeping with that other Japanese POW tale you can’t quite dissociate from it, The Bridge on the River Kwai, has an old fashioned approach to the depiction of violence and suffering.

In keeping with its focus on the psychological effects of torture, the story of Eric Lomax, a British signalman and rail anorak captured in the fall of Singapore and subsequently co-opted in becoming an adjunct to the slave labour construction of the Thai-Burma railway, never becomes party to the sadism of the Japanese. It’s a very British film, internalising those mythological values thought to represent King and Country – dignity, self-sacrifice, heroism, bravery and understatement. Consequently instead of ramming home historical brutality using Mel Gibson-type excess (Gibson’s version, one feels, would be particularly hard on the British), Teplitzky cuts away, building horror using reaction shots and Colin Firth’s haunted face. It’s a highly effective approach that says little, frames little but shows much.

As you might expect from a movie that celebrates its real world protagonist, the movie omits Lomax leaving the wife he met following liberation for the younger woman played here by Nicole Kidman, instead treating their relationship as something unburdened by matrimonial entanglements – a fresh union, ending a period of what we infer to be years of lonely drinking in a Berwick mess with old army buddies. As the story focuses, at least in part, on Kidman’s growing realisation that Firth’s trainspotter is damaged and deranged, it seems strange, and perhaps regrettable, that Lomax’s first wife, Agnes, who presumably suffered the after effects for 35 years and would have had some insight into her former husband’s troubles, didn’t make the cut, but in a movie about the wobbling of stiff upper lips and old secrets impinging upon the present, the filmmakers obviously felt duty bound not to impugn Lomax’s character.

That’s a pity because the irony of a story in which a man manages to reconcile with the enemy that tortured him but not the wife he left, may have been more dimensional and interesting as a consequence. We’re reminded that real life is only ever selectively stripped for audience friendly themes, it’s seldom offered up intact, with the ambiguity still attached.

Nevertheless The Railway Man is a solid if unexceptional war movie that benefits from the double whammy of Firth and Jeremy Levine, as the old and young Lomax respectively, sensitive direction and an effective score from David Hirschfelder who, and I hope you’re sitting down, dares to augment and induce audience emotion in a way that’s increasingly seen as passé by the latest generation of film composers.

What may have a been a weakness in a fictional tale, the reconciliation of Firth and former tormentor Hiroyuki Sanada, has the benefit of being true, and therefore plausible, but one can argue that despite this writers Frank Cottrell Boyce and Andy Paterson never truly sell Firth’s forgiveness. On one hand we have a man driven to life-long murderous fantasies and moments of psychosis in which he attacks council bailiffs with a Stanley knife, on the other an old solider who confronted with his nemesis, lets him off the hook following a chat and exchange of letters. The grey, indeterminate psychological territory that bridges the two states, pun intended, is never mined. Perhaps Boyce and Paterson didn’t really understand it themselves but if they didn’t then we have little hope of making the connection. Instead, beholden to plot considerations and moving the story forward, Lomax’s damascene conversion is framed as a dividend from the love of a good woman. That wouldn’t be much comfort to Lomax’s first wife I suppose but as she doesn’t exist in this retelling, no one’s obliged to think about her story.

Certificate: 15 for Nicole Kidman's haircut, Stellan Skarsgård hanging around and the omission of first wives.