Film Review: All Is Lost 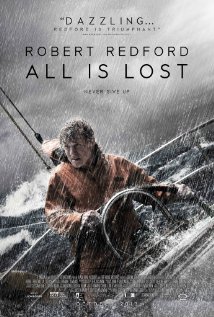 The Rub of the Ancient Mariner

“Fuck” is an exclamation oft heard in the movies but seldom has a character earned it as Robert Redford’s lone mariner earns it in All Is Lost. J.C Chandor’s near silent drama has the wizened one time matinee idol all at sea, forced to fight a rearguard action against the elements as misfortune compounds upon misfortune, turning one yachtsman’s theatre of solitude into a waterlogged waiting room for the hereafter.

Chandor deserves a great deal of credit for trusting the tension and pathos inherent in his scenario, and by extension the audience, never succumbing to the temptation to create drama using egregious acts of manipulation. There’s no visual effects blowouts or trite sentimentality; the movie’s quiet and dignified like its star. The seriousness of the situation deepens as it would from the character’s perspective; gradually and without the kind of flagging you’d expect in a thriller. Score is used sparingly, which is a relief, because had there been an eardrum-shredding cue every time Redford’s plight became more precarious, audiences would be deaf by the close.

The naturalism in Redford’s performance is the movie’s big dividend. When his yacht’s hull is punctured by a rogue cargo container, the first of many setbacks, he doesn’t panic, nor talk to himself for long periods, sharing his internal monologue with the audience as lonely movie characters tend to do, rather just gets on being practical minded and methodical. In short, this has the feel of a real world nautical nightmare with the story’s solitary character acting as any practiced seaman would under the circumstances. The result is a drama full of intrigue, built on close identification with the imperilled floater.

How to build character when you’ve no one to play off? Here, Chandor adopts the old adage that by their actions you shall know them. We never learn Redford’s name or why he’s taken to yachting around the world in his dotage, but we don’t need to. His backstory is laid out with the greatest economy – a few words to persons unknown, a few objects from his travels littered around the boat, but in it’s his calm and no nonsense response to the unfolding disaster that we get the measure of the man. Little asides, like Redford’s last look back at his boat when at he’s forced to abandon ship, hint at a retirement dream gone awry. The movie manages to be touching in this way without displaying its intent in neon. In short, this is the one man against the elements movie Robert Zemeckis would have made with Tom Hanks had he J.C Chandor’s reverence for the intelligence and concentration span of the potential audience.

Certificate: 12A for intense Robert Redford, inclement weather conditions and being ignored by a callous Captain Phillips.