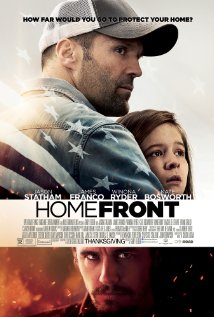 Pitched as a simple meathead and potatoes standoff between Jason Statham and a family of malicious rednecks, headed by a moustached James Franco, Homefront is more complicated than first appearances would suggest. Knowing Sylvester Stallone clumsily wrote the screenplay using his growth hormone fattened member, dipped in ink and indiscriminately slapped against a blank page, is unlikely to engender confidence, but it’s a well plotted beast with some fully-formed payoffs thanks to the help Sly’s received from Chuck Logan: the author whose source text has helpfully provided the structure that would surely have been missing from a Sylvester original.

The signs that Stallone’s working from a literary source aren’t to be found in the characterisation, which is flat as a pancake, nor the dialogue, which is blunt and to the point, much like the screenwriter; “you smell the fucking wood burning?” being about as memorable as it gets; rather the complications, which turn a simple tale of hick vengeance into something more satisfying: a story that can be sustained over 100 minutes instead of 10.

A mute and troubled Statham, a man who needs an infusion of quips and long fascist speeches with which to dispatch villains, and knows it, plays Phil Broker, a DEA agent who retires with his daughter to a Louisiana backwater following a botched sting operation. There said offspring beats up the school bully, coded fat for easy hate, who happens to be James Franco’s nephew. Naturally the family want to teach the child humility and humanity, so plot revenge, and that might have been that but luckily for us, and the movie, Franco is the town’s meth cook, less breaking bad, just bad, whose enfeebled attempt at payback escalates rapidly when he discovers Jason’s true identity and his connection to the drug overlord who blames Statham for his son’s death.

Director Gary Fleder drops points for excising the line of action and anything approaching thrills from each mercilessly edited action sequence but regains a few with his decision to gradually escalate tensions between Statham and Franco, the former slowly (very slowly) awakening to the realisation that he and better than average child actress Izabela Vidovic are in trouble, while the latter plots to make Jason and child brown bread with the help of a small army of heavily armed junkies.

Unusually for a movie this nuance free there’s a sincere and often successful attempt at engaging the audience’s brain. Characters like Austin Craig’s initially one note playground sadist and Kate Bosworth’s foul mouthed mother, start life as simple bread and butter grotesques but find redemption by film’s end. Credit must go to Fleder and Stallone for refusing to settle for a simple, binary, good against evil actioner; investing the material with something resembling human interest. If the pyrotechnics had been better orchestrated and Statham’s hero had been given a hint of personality, this might have been very good indeed. As it stands, it’s highly watchable, which given its pedigree, will do.