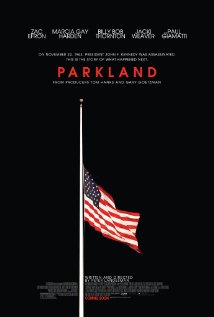 Released on the 50th anniversary of President Kennedy’s assassination, Parkland has come under fire, excuse the pun, from conspiracy aficionados everywhere, including British filmmaker and critic Alex Cox, for unashamedly sticking to “the official story”. Woe is us, cry the grassy knoll brigade, Peter Landesman’s account of the events following the creation of the world’s most successful snuff movie is as far from the critical and paranoid cinema of Oliver Stone and Alan J. Pakula as it’s possible to get and this, coupled with its dewy eyed nostalgia for the president, is the culmination of a shift to the right that’s seen Hollywood shed both its brain cells and its balls since the good ol’ days when Kevin Costner was on hand to indict LBJ as an accessory after the fact.

Parkland may contain a single scene in which an embarrassing FBI file on Lee Harvey Oswald is put to flame in a toilet, because you can’t have a JFK movie without a cover up, but for the most part it’s an unassuming, non-political tract interested in the personalities who found themselves caught up in what just might be worst instance of Texan hospitality on record.

The respect for the murdered president, the grief displayed by all concerned, marks the film as a document of a different time, an age when the US government would respect Abraham Zapruder’s property rights and ask him for a copy for his infamous 26 second movie rather than confiscate it in the national interest. This, surely, is where Landesman’s treatment gets a pass. In attempting to capture the moment he’s opted for an approach that’s deferent and old fashioned. This is an intimate history – a history filmed in close up and medium close up: its narrow three day focus precluding the sort of sweep and investigation that Stone brought to the table in JFK.

An uncritical reconstruction of events needn’t mean a lesser movie but Parkland suffers from budget limitations and an underwritten screenplay that starts to unravel once the meat of the story, the immediate aftermath of the assassination, has passed. Indicative of the fact that it’s often a slight and insubstantial affair, the most poignant moment is one that Landesman had no hand in filming. Archive of Kennedy’s last morning in Fort Worth, a few hours before his murder, shows him in good spirits and being teased by his hosts who offer the President a Stetson in the hope that “it may protect you from the rain”. Kennedy, unaware that it rains bullets in Dallas, politely declines but promises to wear it in the White House “on Monday”: the day of his funeral as it turned out.

Nothing in Landesman’s film quite matches that sense of tragedy but the strongest moments come early with Parkland’s doctors desperately, insanely, trying to save a President who’s had a quarter of his head blown off. The shock of the event is most vivid here: squelching chest compressions that seem to go on for an eternity, an aside, likely to keep Alex Cox up at night, in which Zac Efron’s junior surgeon destroys evidence by performing a futile tracheotomy, thereby obscuring a wound forever to be argued over by the exit and entry camps – Jackie Kennedy handing over the fragments of skull and brain she picked up from the back of the presidential limo. It’s unbearably sad and horrifying: a scene that’s more immediate and successful in marking the fallout from the killing than anything that follows.

Shorn of the impact of the event and the reams of eye witness testimony that inform those early scenes, Landesman finds himself in a bind in the last hour; keen to explore the impact of the murder on the family of Lee Harvey Oswald and draw some maudlin parallels between the pauper’s burial of the alleged assassin and the pomp of his victim’s funeral. Unfortunately, here the movie’s limitations are too apparent by half. James Badge Dale is a slight and TV movie presence as Oswald’s brother, Robert, while Jackie Weaver as the family’s eccentric matriarch lists toward caricature. It’s hard to invest in a brood that’s so lightly drawn and consequently Landesman’s attempt to explore the effect of the assassination on the relatives Oswald left behind comes to nothing. To paraphrase Parkland’s doctors, there’s nothing to work with.

Whether you’re with the conspiracy theorists or not it’s difficult to watch Parkland, a movie that incidentally is only set therein about 30% of the time, and not share their disappointment that this anniversary flick doesn’t better interrogate the events of November 22nd 1963. It’s a movie in which good work from the likes of Paul Giamatti and Billy Bob Thornton is undermined by Kat Steffens’ one note Jackie Kennedy and Jacki Weaver’s pantomime Marguerite Oswald, where a reluctance to editoralise results in a film with little or nothing to say, and where a personal history of a very public disaster fails to hit as hard as it might as the voices chosen aren’t strong enough as written to speak for the people who were there on the day President Kennedy came to town.