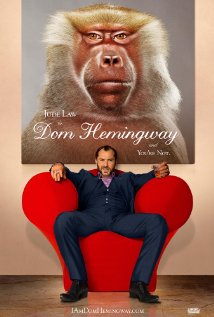 Knees up mother brown, my old man’s a dustman and love-a-duck, Dom Hemingway’s a right mockney caper and no fuckin’ mistake. Alright, there’s no crime per se, the plot’s driven by a lot of cack handed attempts at recouping ill-gotten gains, and okay, it’s one of those Brit crime movies modelled on the Guy Richie school, in which there are no characters only character traits; little bits of ready-made iconography like Richard E. Grant’s missing hand and Jude’s sideburns; but what do you want, character and plot? Memorable patter? Well perhaps you should have mentioned that to Richard Shepard before he started work!

This is a film trying very hard indeed to lodge itself in the audience’s mind. You can practically see the beads of sweat forming on its brow. From the opening soliloquy, in which Dom eulogises his penis as he’s blown in his prison cell, to a man humping a safe, this is a movie desperate for your attention. A nice line in mordant wit and the sense Dom and his compatriots were more than cartoon characters with tombola dialogue stuffed into their pie ‘oles, “face like an abortion” indeed, might have helped, but instead we have a series of unfortunate mockney events, a substitution for plot, with nought but Jude’s eponymous peacock propelling things forward. Do we like him? Not enough. He’s a man built entirely from anecdote and wardrobe. ‘70’s haircut and suit? Check. Character’s who’ll remind Dom of his past exploits? Check. Doing things this way certainly takes all the hard graft out of screenwriting.

Like Hudson Hawk, another movie built around a persona with next to nothing bringing up the rear staring Richard E. Grant, Dom Hemingway lacks the strength in depth that reinforces all good capers. You can point to a clutch of amusing scenes but for the most part it’s a laboured affair that goes nowhere. Shepard will have hoped that the louder Dom shouts, the more he rants, the less we’ll care that the movie plays out in a cardboard universe, but he reckoned without all the other flicks that have done it better: movies that show instead of tell.

If ugly dialogue, violence and a lot of mugging were effective substitutes for three dimensional characters, memorable mouth fill and story beats that really paid off, Dom would be an instant classic. As it is, all concerned should have a word with themselves.

Certificate: 15 for excess facial hair, mugging and an awful lot of nothing.