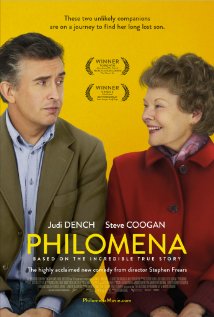 Early in Philomena, Stephen Frears’ touching drama, plucked from historic events, reluctant protagonist Martin Sixsmith, a former New Labour spin-doctor and journalist who’s been door stepped by the daughter of a Irish pensioner with a missing son, tells us that he’s not interested in human interest stories. They are, he says, fodder for the simple minded. That’s not an accusation that can be levelled at this human interest story however; it’s a sensitively acted and well judged piece that lays bear an historic injustice and handles the marked differences between the wronged woman and her unlikely ally with great humanity and understanding. It’s a film that practices what it preaches.

That historic injustice will shock many. It was Philomena Lee’s bad luck to fall pregnant after a fairground fumble in ‘50’s Ireland, a nation not famed during this period for its progressive and liberal attitude to extra-marital sex. In a country where religious hypocrisy and a loathing of female sexuality was institutionalised, poor Philomena found herself disowned by her family and sent to live at one of the infamous Magdalene asylums. There she was generously afforded an hour a week with her baby until the sisters deigned to sell it, pocketing a £1,000 for the upkeep of the prison and condemning the mother to a lifetime of turmoil and longing. 50 years later, enter Sixsmith, late of Tony Blair’s communications clique and at a loose end. He may see the story as Reader’s Digest material but his editor’s prepared to bankroll an investigation, thus these strange bedfellows set off to find the long lost son.

It’s soon apparent that Frears’ film is less interested in the mystery, solved quickly thanks to Sixsmith’s nose and his many press contacts, than the relationship between the hack and the mother. Early scenes lay on the differences with a trowel, lest we miss the contrast. Steve Coogan’s scribe is Oxford educated and cynical, in addition to being an atheist with a dry wit – “I don’t believe in God and I think he could tell”, while Judi Dench’s Lee is God-fearing, reluctant to criticise her former oppressors, who after all were only doing the Lord’s good work, and thudderingly literal. If Coogan’s initially inclined to write her off as a Daily Mail reader with a penchant for romantic fiction, he soon comes to respect her good heart and reluctance to judge, while his mercenary interest in her backstory gradually shifts to genuine indignation as the details are uncovered. In short it’s a fable made for movieland in which Coogan’s character learns to respect the parts of Philomena’s faith that empower her to forgive her tormentors, while she in turn is schooled in letting go of her shame and buying into his journalistic instinct to share the story with the world.

If that sounds little too neat, too homespun, and the story asks us to believe in one too many coincidences, it matters not: this is a gently witty and low-key retelling of a fascinating story. Central to its success are the two leads. Coogan, working from his own screenplay, provides the light-touch cynicism and ire required to carry those audience members who, like Sixsmith, wouldn’t normally look at this story twice, while Dench gives a natural and unaffected performance in the title role, showing us a woman of simple tastes who’s used her faith to mollify a lifetime of catholic guilt and psychological trauma.

Credit too must go to Frears, whose unfussy direction and focus on the dynamic between his two lead characters pays dividends. It’s a film that might have lapsed into melodrama but didn’t, that could have laboured the story’s various twists but doesn’t, that sets out to show the human cost of a little known, ugly chapter in Irish history and does.

Certificate: 12A for a meal at a Harvester, evil nuns and the Emerald Isle.