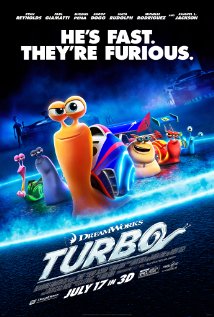 The world of animated movies for children has always been a little unusual; anthropomorphised toys that enjoy the five senses sans organs and a central nervous system for example; but some would say that’s part of the magic. Turbo’s a hard sell nevertheless. The filmmakers would have us believe that a snail with a human brain who dreams of competing in the Indy 500, much as the humble slug may harbour fantasies of being a footballer, could be sucked into the supercharger of a drag race car, ingest the Nitrous Oxide therein and have its DNA altered to give it the properties of said vehicle, including, but not limited to, the ability to accelerate to over 200 mph.

Spider-man took on arachnid characteristics when bitten by a radioactive spider, The Fly was so named because he fused with a fly, but Turbo, a poster snail for nominative determinism, becomes car-like despite being soaked in nothing but chemically tailored fuel. If I drink petrol I don’t become a car engine yet Turbo assumes all the characteristics of the car itself – head lights, a fully working radio with choice of stations, indicators – the lot. It isn’t clear why, beyond the writers’ inability to work out a semi-plausible way for Turbo to be supercharged, this should happen, nor why zipping along at 200mph doesn’t shred the snail’s delicate undercarriage, we’re simply asked to go along it, on the basis that if it didn’t concern the people whose job it was to develop the movie, it certainly shouldn’t worry us.

In fact hardly anything’s our business – not that snails have human-like intelligence but Crows are mindless animals and certainly not that the Mexican schlub that ostensibly befriends Turbo but is primarily interested in monetising his skill to save his family’s ailing Taco restaurant, can accept that a snail can understand English and race at 200mph but not that it may be able to talk; an imaginative limit that Turbo tacitly accepts by shutting up in his presence.

It all smacks of a movie that hasn’t had the same love and attention fostered on its conception as the best modern toons. What we get is an undemanding entertainment for both children and adults. Pursue your dreams, don’t quit – that’s the simple message that’s never overburdened with nuance or narrative complexity. David Soren and his Dreamworks Animatoids follow the Pixar playbook page by well-thumbed page, replicating the utilitarian plotting and kooky characters that lend themselves so completely to merchandise spin-offs. But Pixar at their confected best are more successful at balancing child-friendly antics with knowing humour and post-modern asides for their ticket-buying parents. That’s not to say that Turbo skimps on the shadow movie business entirely, but what there is can’t detract from the underwhelming and ultimately inconsequential film being sold.

Certificate: U - uninspired for all.