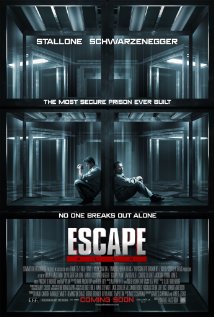 Twenty-five years ago, the prospect of a super-human team up featuring Sylvester Stallone and Arnold Schwarzenegger would have engorged audiences worldwide, but timing in life is everything. In 2013 this is an old fart’s reunion; mummified flesh partnered with calcified bone. Stallone’s sunken face and veined appendages ape a medical experiment gone awry, while Arnie’s last on-screen appearance, The Last Stand, failed to disguise the old lunk’s stiffness, both in performance and mobility.

If nature and the laws of action cinema have decreed that yesterday’s big beasts of the genre sip their protein shakes at home, with dignity, then neither actor is listening. Escape Plan has been engineered to put both men in an environment, a high tech prison, where constraints are placed on movement but there are still opportunities for testosteronic mayhem. This is a cage for real men; the kind that eat bloody raw flesh and get full-body tattoos. Therein Sly and Arnie can still look imposing without having to exert themselves. “One man was left to rot for three days” says Schwarzenegger of the brutal regime’s treatment of a prisoner. The result, you think, would look something like Stallone.

The physical credentials of both men notwithstanding, Escape Plan has a solid premise. Stallone is, er, a former prosecutor whose wife and son were murderized when the man he put away escaped from prison and took his revenge. Consequently Sly’s devoted himself to ensuring that every prison’s a fortress, testing them from the inside. We learn he’s been successful in slipping out of no less than 14 institutions and that subsequently the CIA wish him to test their latest wheeze; a super-clink for off book undesirables. Yes Sly’s literally written the book, however unlikely that may seem, on making prison escape proof. Unfortunately Jim Caviezel has used this tome to build the cage Sly now finds himself in, and in a series of wild plot contortions that look to have been laid down long after the core idea of Stallone breaks out of the world’s toughest prison was waved through, it transpires that shadowy forces intend for him to stay there.

Inevitably it’s all rather inert and lacking vitality; a movie that invites you to imagine what the 1988 version would have looked like featuring the same cast; a film that surely would have been more brutal, more physical and inevitably better staged as it wouldn’t have been necessary or desirable to disguise the physical shortcomings of the leads using spasmodic camera work and quick edits. That’s not to say that Escape Plan isn’t intermittently fun: Caviezel’s sociopathic and well-tailored warden is enjoyable, so too the brief flashes of action-excess that would have been repeated tenfold in the old days, but it’s ultimately too creaky by half, as well as being the longest setup for a joke about bad cooking you’ve ever seen.