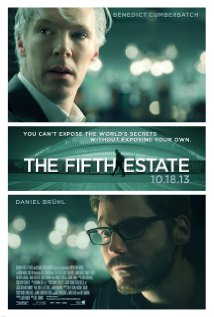 With NSA whistleblower Edward Snowden in legal limbo and WikiLeaks frontman Julian Assange trapped in London’s Ecuadorian embassy, after that enemy of the people, the UK government, refused to protect him from a Swedish rape indictment, Bill Condon’s film is a timely salvo in the debate on freedom of information and the public’s right to know.

Following a potted history of the production and dissemination of information from the humble printing press to today’s tablet computers, the question put before us is whether it’s socially just and desirable to fully disclose information or whether realpolitik trumps the public’s thirst for transparency in sensitive areas, such as national security. From a filmmakers point of view this is a no win scenario.  If you seek to profile a living and current public figure, still embroiled in the very events you wish to comment on, a position must be taken. Perhaps it’s not surprising then that The Fifth Estate tries to have it both ways, conscious that the watching media will label the film naïve if it doesn’t consider the possibility of WikiLeaks being criminally irresponsible and its founder a self-righteous egotist, while those sympathetic to Assange and his new world order will take similar umbrage if the film looks to be that same media’s mouthpiece.

Consequently the cooped up activist, played as a damaged and socially awkward cyber-prophet by a transformed Benedict Cumberbatch, gets short shrift on a human level while his greater principles are lauded in the abstract. The movie positions the cause as a crutch for Assange’s self-importance, lamenting the dangers while crow barring in scenes that talk up the historical significance of WikiLeaks interventions in the information age and the dawn of a new information sharing democracy with the power to humble governments and empower the individual. If you’re not sure which way to turn, don’t worry the filmmakers don’t know either. The problem, in dramatic terms, is that this leaves us back where we started.

WikiLeaks spins itself as an organisation that “protects people not reputations” yet they’re acutely aware that Assange’s reputation is integral to their credibility and that consequently his portrayal in Condon’s film, more self-righteous cock than people’s champion, matters. Their campaign against the movie, positioning it as a piece of sinister corporate propaganda, is therefore inevitable, but any self-respecting patron will be sympathetic to Condon and Cumberbatch’s interest in Assange’s personality as well as his politics. Cinema’s at its best when it seeks to understand and there’s enough excavating going on here to make the inquiry worthwhile.

Can we believe it? Well in a final self-reflexive scene, underlining the theme of full disclosure, the movie acknowledges its own existence with the cine-Assange openly questioning the veracity of the very tomes upon which the screenplay’s based. It’s a gutsy move, reminding audiences that what they’ve just seen is but one version of the story. That won’t be enough to pacify the Assangeites or address the concerns of critics like yours truly who found the treatment a little pedestrian and some of the visual metaphors clunky as hell, but The Fifth Estate is interesting enough to generate the very talking points it seeks to provoke. In short: mission accomplished.