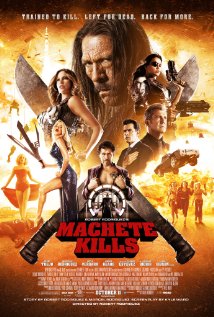 In a move that threatens to retract Machete Kills into its own arsehole, the post-modern exploitation encore opens with a trailer to the sequel, Machete Kills Again…in Space. This is more audacious than you might think. In its wake we’re reminded that the Machete gag works best when we’re left to imagine the whole awful movie for ourselves, the preview having provided a taste of what might have been (and may yet be if Robert Rodriquez has his way). The thought gains form and weight over the bloated running time of the feature that follows. But long though that feature is, the trailer also acts as an insurance policy against Rodriquez’s poor pacing and the screenplay’s sketch-like quality. Like Mel Gibson’s space-crazed mad man we’ve had a glimpse of the future and consequently there’s fun to be had piecing together how a story that begins with Danny Trejo being hung in a Texan sheriff’s office ends in a Moonraker-style laser gun battle in orbit of an alien planet.

So like its predecessor there’s the sense that the movie in question was more fun to make than to watch but give Robert Rodriquez his due; he’s thrown every low-rent gag and then some at this Mexican beast, perhaps fearful that the time may not come again. Kills plays like an ideas dump from the Grindhouse universe. You’re invited to enjoy everything from cleavage-clad death squads to guns that turn people inside out, by way of a gender bending assassin and a US president with a penchant for weed. It was almost certainly designed with the drug in mind.

If the movie’s shapelessness is a regret, discipline in the editing suite being the one import from the world of serious filmmaking that might have made it more cutting, it’s hard to be truly disappointed with a flick that has Charlie Sheen’s commander-in-chief tell our hero, “I’m not asking, motherfucker”, later treating us to a man killed when his guts are thrown up into the blades of a helicopter. It’s this gleeful combination of junk dialogue, “you’ve saved the world’s ass”, and inventive cartoon violence that gives the enterprise an oddball labour of love-feel. The affection’s contagious.

Yes it’s self-indulgent and too self-conscious by half, but Machete Kills is packed with great ideas and riffs on old movies, boasting a bonkers plot that no schlockaholic could resist. “See you in space, Mr Machete” declares Mad Mel in the closing minutes. Let’s hope he does.