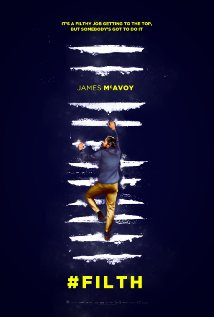 Danny’s Boyle’s adaptation of Irvine Welsh’s Trainspotting wasn’t just an act of cinematic virtuosity; it had the feel of the times – a taste of the zeitgeist. Welsh’s shtick is his ability to develop devastating snapshots of the degenerate aspects of Scottish culture in a solution made of mordant wit and self-deprecation. Trainspotting captured that schism in Scots identity; a fiercely proud country on the one hand that’s sick with violence, drug and alcohol abuse on the other. Renton’s “it’s fucking shite being Scottish” speech seemed to capture that sense of drift and subservience; a sense at odds with a glowing cultural heritage. Jon S. Baird’s film of Welsh’s 1998 novel, Filth, has much of the same D.N.A – an opening scene that lists the nation’s many achievements before mocking them with talk of deep fried mars bars and a gaggle of fat Neds; a morally spent protagonist who seems to embody everything that’s wrong with the national character – alcoholism, racism, misogyny and homophobia; but it’s a movie out of time. It isn’t just Baird’s style that recalls Boyle’s film; the conspicuous stylisation, the soundtrack, the tartrazine tone; it’s his film’s conception of Scotland. A lot’s happened in 15 years.

For a culture that’s grown in confidence since devolution and may now be on the verge of severing ties with the UK altogether; an unthinkable proposition at the time of the novel’s publication; Filth must look like a retrograde piece of work; a glib head fuck curiously out of step with the now. It has blackly comic moments that make you laugh out loud and a terrific turn from James McAvoy as the bent ‘tech who’s gradually losing his mind, vying for promotion in a desperate attempt to win back his wife and daughter, but it’s the degenerate culture that fuels his downward schizoid spiral that gives you pause. It feels less like a contemporary snap, more an old, dog-eared Polaroid.

Still filth is what you’re promised and filth is what you get – lashings of the stuff. McAvoy’s descent into despair is marked by intimidation, co-opting a minor into oral sex, auto-erotic asphyxiation (also known as a touch of the Hutchence), brutal violence, drug dependency and a weekend in Germany. But for all that, and McAvoy’s domineering and ultimately touching performance, it’s an unremittingly bleak piece of work: more a colourful tribute to Welsh’s cinematic heyday than the Scotland of 2013. Even Frank Sidebottom, who features on McAvoy’s drool box, has been dead 3 years.