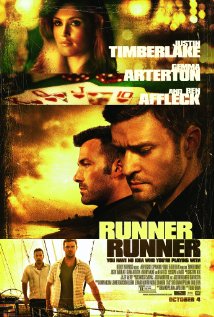 I was going to begin this review with some pun on safe bets, losing gambles, that kind of thing, and I suppose I contrived to do it by the back door, but there’s a lethargy about me as I write this: I’m a man too tired to craft sentences and scrape up jokes from the bottom of the barrel. I feel this way because I’ve emerged from a waking coma following 91 minutes of Runner Runner.

If it were possible to feel something, anything – a momentary burst of inspiration, then the temptation would be to stop the film, wind back each scene, enter its passive world and ask each exchange to be performed again, only this time with feeling. A thriller lacking tension, vitality, intrigue and plot – indeed anything like a substantial scene at all, is no longer a thriller, it’s something else entirely; there may be no word for it. The only passion attached to this production is Lab Colour Timer, Jim Passon. Jim’s good but he can’t carry it alone.

The movie’s furrow has been ploughed many times. Justin Timberlake’s Princeton prodigy is Tom Cruise in The Firm, Keanu Reeves in Devil’s Advocate; the promising young buck who sells his soul for a shot at wealth and power, only to suffer a moral relapse and realise he’s in too deep with the bad men. Here the devil appears in the inevitable form of Ben Affleck, an online casino kingpin with a Costa Rican gambling racket who tempts Justin’s maths geek when he comes to remonstrate over some stolen virtual cash.

When the two meet and Timberlake’s bought with the promise of a seven figure haul, it all feels a little breezy and inconsequential. Justin didn’t have to work particularly hard to get close to Affleck and it isn’t much of a choice for him: he’s studying to become a broker, so money’s all he really cares about. But wake up kids, because writers Brian Koppelman and David Levien are ready to gamble with a couple of complications.

Affleck’s trophy girlfriend, Gemma Arterton – fully bronzed, is eye-widening mimsy for Timberlake to covet. The FBI jump on our whippersnapper and blackmail him into being a snitch. It’s all very dangerous for Justin and we look forward to the inevitable conflict with Affleck. It’s therefore a shock to find that neither thread is pulled. The future Bruce Wayne doesn’t give a shit whether Timberlake sleeps with Arterton or not: she’s just pussy on the payroll – a possession to be leased when necessary. He sleeps around, he’s not a hypocrite but that’s not particularly helpful in generating tension. Any hope it will come from Timberlake informing on Affleck dissipates in the very next scene when he tells his boss about the approach. It’s only now we realise that this is to be an experimental thriller in which none of the usual mechanisms for generating a threat to the protagonist are going to be used. It’s refreshingly avant-garde.

If the screenwriters won’t help then maybe director Brad Furman has other means of generating excitement. Perhaps, we reason early on, there’s going to be scenes of electric intercourse between Timberlake and the shapely Arterton, vice like tension at the poker table, a la Casino Royale, daring escapes from the FBI, standoffs with Costa Rican gangsters, car chases, fights, the thrill of the escape from Affleck’s clutches as the net closes in – but no: nothing. It’s as though these scenes have been cut. All that remains is a tepid punch up, a quick fumble against a wall and a lot of shouting. The tempo hardly varies from scene to scene, line readings are machine-like: when all concerned care so little about the material it’s offensive to expect the audience to get involved. Anyone got a coffee?

Certificate: 15 for a bronze woman, all the exciting or intriguing parts consigned to the cutting room floor and Justin Timberlake.