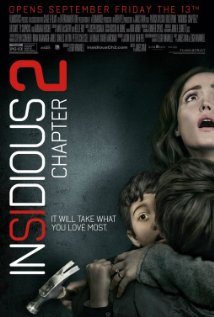 Quit While You're Ahead

Don’t let the existence of a feature length sequel fool you; Insidious wasn’t conceived with a second chapter in mind. We can assume this with confidence because James Wan’s first haunted family shocker ended with Patrick Wilson’s paterfamilias possessed by a malevolent old woman’s ghost (of whom more shortly) and throttling Lin Shaye’s medium. There she lay, mouth open, dead in an armchair. Rose Byrne, unlucky enough to be inseminated twice over by the world’s one and only haunted man, discovered the grisly scene and a still wet photograph showing Shaye’s spectral attacker. Enter Wilson, hand on Bryne’s shoulder and an ear skewering musical cue. That, we surmised, was the end of that: one last jump scare before the credits. The end.

Yet two years on trailers for Insidious: Chapter 2 showed the Lambert family apparently still spooked and once again shacked up with evil spirits. Fans, for surely there are some, might have wondered how Wan and writer Leigh Whannell had written themselves out of a corner. Publicity suggested the sequel would pick up where “chapter 1” left off but that couldn’t be, surely? The Lamberts couldn’t just go about their business with a corpse in the living room could they? How would they explain the murder to police? Was the sequel going to progress in real time…or the past? Any other timeframe was going to require a lot of questions answered. Consequently it’s a shock to discover that Insidious 2 does indeed immediately follow-on from its predecessor and Wan and Whannell’s solution to their sequel obligation problem is to fudge the fuck out of it.

The police that question Bryne in the opening scene are amongst the most trusting in the world. They take her word that husband Wilson couldn’t have been responsible for the murder, despite some weighty circumstantial evidence – not just the presence of a dead woman with strangulation marks on her neck, but the limited coterie of suspects, two of whom are children under the age of 12. Thus instead of immediately arresting Wilson, or indeed any of the other men in the house, they defer judgement until they can get fingerprints from the indentations in Shaye’s neck (later, mystifying, ascribed to someone else).

This buys Wan enough implausible story time to relocate the family to Grandma’s house and allow Bryne to contemplate her husband’s personality change. Could his strange behaviour have anything whatsoever to do with his journey to the hereafter, or the curious incident of the dead woman in the living room, or indeed the picture of that ghost; all the stranger for Wilson being the only other person in the room at the time of the killing? Fortunately for the movie Bryne can see no immediate connection and we’re consequently set to enjoy Wan’s familiar haunted house scares and a new sub-plot, that attempts to retcon the first film’s backstory with all the subtlety and seamlessness of a plot devised in a hurry because credible continuation or no this movie already had a release date.

Insidious: Chapter 2 is a movie forged in haste (the continuity’s awful) and written in a muddle. As though imbued with the power of astral projection one can almost picture Wan and Whannell, caked in their own sweat, scrunching page after page as attempts at organically extending the first film defeated them. That’s not to say there aren’t interesting ideas – the original’s man-haunting spectre recast as a cross dressing serial killer, the netherworld a place where the dead can piggyback on memories to travel back in time (allowing for some Back to the Future Part II style revisiting of scenes from the first film) – it’s just clear they were conceived long after the original movie wrapped as devices to generate more plot. Thus the movie finds itself haunted by a three-headed beast: incoherence, illogicality and contrivance.

James Wan tells us that Insidious 2 represents his horror swan song and viewing the result that’s just as well. His machine-like scares still work and a creepy atmosphere remains palpable, but all too often this feels like a film directed by a man with one foot out the door and his mind already turned to bigger and better things.

Certificate: 15 for a mother who doesn't notice her kids have aged 2 years overnight, strong bullshit and an old, deserted hospital.