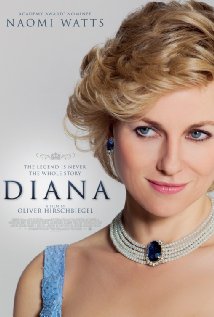 In the summer of 1998 I was the sole passenger on a bus tour of Port Angeles, Washington. When the driver heard I was English he started to talk about Princess Diana. “It must have been hard for you guys,” he said, “kinda like what JFK was for us.” “Oh no,” said I, “it couldn’t be more different. You see the murder of JFK, an elected president, was a tragedy because Oswald overturned the democratic will of the people with a bullet. Diana was a constitutional aberration who forgot to clunk-click”.

Perhaps because I have nothing invested in the Diana myth, as that anecdote subtlety implies, and found the tsunami of grief that followed her death an affront to common sense – something akin to a national nervous breakdown – there’s little sense of outrage at Oliver Hirschbiegel’s vapid biopic. Sure it’s as contrived, melodramatic and suspicious of its audience’s cognitive powers as the soaps that Di confesses to watching during a date with love interest Hansat Khan, but in being so the director offers a treatment that evokes his subject’s public persona very well, albeit by accident.

One can talk about Hirschbiegel’s abdication of style; his total failure to make anything interesting or dynamic happen within the frame, but it’s the production’s ditching of biographic responsibility that’s worthy of note. Screenwriter Stephen Jeffries might be a pen name for The Sun’s gossip columnist. Whole portions of Diana play like a parody of royal biopics – a wet Hollywood fart. Surprisingly the film’s a British/French co-production. It’s not like that pair of nations to do Di a disservice.

This Anglo-Franco pap takes a novel and somewhat schzoid approach to profiling its subject. Scenes that sentimentalise the Princess’s memory, laying on her selfless credentials with the upmost goey-eyed reverence, “you’re so good at giving love” says her acupuncturist (a polite way of saying she sleeps around), are juxtaposed with those that paint the former Mrs Windsor as a media manipulator who used the watching paparazzoids and their editors when it suited her.

A late night visit to the hospital to meet heart surgeon Khan, her target fuck, is covered with a lie about comforting terminally ill kids. Pictures of her and Dodi entwined on a yacht during her final summer are products not of press intrusion, as the legend would have you believe, but a tip off from Diana herself; eager, it’s suggested, to get the pics in the paper to make Khan jealous. Most controversially of all Diana’s trip to visit the child victims of Angolan minefields is undercut with a sneering aside showing the princess temporarily forgetting the injured babes on account of being labeled “a loose cannon” by a waiting hack. Hirschbiegel leaves us with the suggestion that the iconic feminoid was as self-involved as she was selfless, as needy as loving. It’s not a hard sell but to say the case is made using leaps of imagination rather than historic source material is being somewhat generous.

We’re left with a movie that wants to paint a nuanced psychological portrait of Diana but lacks the wherewithal to do so. Hirschbiegel and writer Jeffries, assuming he exists, offer a series of melodramatic curios that Barbara Cartland might have wanted toned down. In one memorable argument between the princess and her soon to be ex-lover, Naomi Watts, problematically prettier than the genuine article, exclaims “why bring me to this Godforsaken park?!” – an awkward lament typical of the movie’s ham-fisted and wholly inauthentic dialogue. Diana, we later learn, has “talent and power” but the only concrete example of the former is her Superman-inspired disguise – a black wig that seemingly renders her invisible to the general public, while the latter’s well and truly flexed when a courier is sent out to get Burger King.

Worse, Hirschbiegel is minded to obnoxiously manipulate his audience – the director imagining houses filled with the same people, mascara running down damp cheeks, who deferentially brought bouquets to Kensington Palace. The princess’s fate is foreshadowed throughout, with all the subtlety of a white fiat driven through each scene. Diana tours a surgical theatre with lover Khan and is told that the point of performing a great operation is to “let the operation happen to you”: good, prescient advice. In case we’ve missed the point, Di asks if it’s possible for a heart to be broken literally as well as figuratively, as though anticipating the fatal tear in her pulmonary vein. Her aide hits her with the fortune cookie tip that “when you fall in love, you must keep going, despite the warning lights” and as if that wasn’t enough (it is), the eve of her final trip is framed by the words, “your life is ahead of you”. Yes, nothing says verisimilitude quite like hindsight.

Much like the similarly light-touch and ahistoric Iron Lady, Diana spectacularly botches the opportunity to make an insightful film about a woman of great historical interest. Instead Hirschbiegel’s treatment concentrates on what’s arguably the least interesting period in the princess’s life, with the all the depth of a tabloid expose. Tony Blair’s eulogy had more substance and I don’t say that lightly.

Certificate: 12A for just about everything.