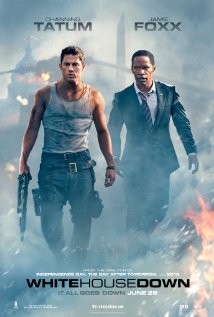 Though he doesn’t like to talk about it, Roland Emmerich had an ulterior motive for celebrating when, on September 11th 2001, the brave passengers of United Flight 93 thwarted Al-Qaeda’s attempt to destroy either the White House or Capitol Building in Washington D.C. Thanks to their efforts the morbid fantasy, beloved of Emmerich and his actionoid peers, of terrorists destroying the seat of US government, remained exploitable. One can hardly imagine the horror if the jihadists had succeeded: Independence Day would suddenly seem in very bad taste. It’s likely no one would want to watch it again. A bad day for America could have been much worse.

Of course White House Down, despite being defecated into cinemas a cool 12 years after that life imitating artlessness event, can’t quite pretend it’s business as usual. The good old days, when you could plan on-screen terrorist spectaculars with tongue in cheek are over. Even a movie as absurd as this one is compelled to ransack that dark day’s iconography for kicks. 9/11 porn is easy shorthand. Consequently the attack on D.C, which poor Chatum “Channing” Tatum must thwart alone, awkwardly and incongruously – given the bloodless, comic buffoonery that characterises the whole enterprise, apes the sinister plumes of yesteryear; going as far as to show a building collapse on a live news channel. If these crude manipulations make you feel uncomfortable, relax: everything that follows is designed to have the opposite effect.

There’s a not great deal to differentiate this Die Hard wannabe from its older sibling, Olympus Has Fallen – both use rogue states as props, both employ kids and besieged presidents as terrorist power-ups and both drop a man hoping to protect the commander-in-chief into a situation where fortunately, he’s called upon to do just that. If there’s a difference it’s that the Gerard Butler flick had some low-rent appeal: it was gleefully second rate. By contrast Emmerich’s version looks polished but is utterly devoid of suspense and thrills. Instead, ignoring the location’s unique potential and content to hollow out the joint using a series of unimaginative shootouts, Stuttgart’s Irwin Allen partners Tatum with Jamie Foxx’s idealised Obama for a dispiriting comic double act that’s neither funny nor plausible enough to stay the course.

Instead it’s the jokes that Emmerich didn’t know he’d incorporated that lift the gloom and turn White House Down into one of the year’s accidental comic masterpieces. An assault on the presidential limo that takes the action round and round the White House lawn is downright hilarious, while James Wood’s villainous attempt to obliterate Iran, his character plugging away at the targets using the POTUS nuclear football, is only undermined by the presence of an 11 year girl standing awkwardly in the background. In short it’s as silly as you might expect from the man who recast Shakespeare as a drunken fraud but all credit to this hack: he’s once again made sleeping well a real possibility, making the plausible implausible.

Certificate: 12A for witless comic relief, a child and Maggie Gyllenhaal's ever changing hair.