FrightFest Film Review: No One Lives 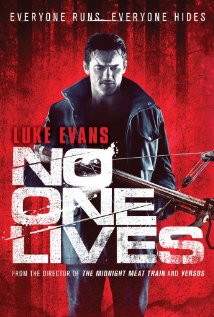 If we must have schlock let it be fun, inventive and full-on exploitative like Ryûhei Kitamura’s bonkers thriller, that finds a place for Luke Evans in the cinematic firmament, much as Cameron’s Terminator turned Schwarzenegger’s shortcomings into Grade-A big screen assets.

The delicious premise is that a gang of murderous thieves, spearheaded by powder keg psycho Derek Magyar, kidnap a travelling couple, only to discover that they’ve inadvertently caged a copper bottomed lunatic in the form of Evan’s serial teen abductor/killer. In antagonist terms it’s a race to the bottom; both gang and nemesis fighting it out to see which has the least regard for human life, yet weirdly, we root for Evans, perhaps because he’s by far the more inventive when it comes to destroying the opposition.

By the time it dawns on Magyar and friends that they’re four furlongs down shit creek with paddles snapped, and this despite helpful warnings from Adelaide Clemens, whom they found in the boot of Evans’ car, he’s already got to work on the head of the family, feeding him into an industrial wood chipper and depositing the bag of sodden remains outside their front door. This gory demise, one of many, sets the tone for what follows; a movie that gleefully revels in its own depravity and low-rent appeal.

What makes No One Lives more than a derivative murder spree is an original villain on villain set up, given an extra layer of discomfort by the Stockholm syndrome relationship between Evans and Clemens. Her curious rhapsodising about her former captor’s zest for slaughter, all the while looking like in a deer alert to the click from a hunter’s rifle, is a welcome junking of the traditional stalk and slash dynamic. When added to a barbarous hoard that get the shivers at the thought of being picked off by someone who’s unhinged as well as sociopathic, you have a nasty but wholly tongue in cheek exercise in excess that’s free to go anywhere it wants, shorn of moral shackles, and does.

Kitamura may be no stylist and God knows his movie takes longer to get started than it should at a total running time of just 86 minutes, but once tables are turned you’ve got a grindhouse shocker with laughs to spare. “Why are you doing this?” asks one of Evans’ wretched but unsympathetic victims. “Keeps me fit” he replies. Need I say more?