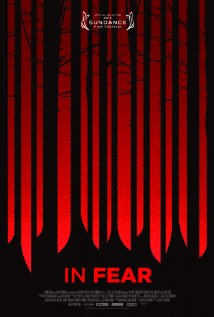 One of the many wonderful ways in which the horror genre inverts received wisdom to unearth a buried truth is in its treatment of the countryside. In what passes for the real world those who’ve signed up to the pastoral, in love with an idyll plucked from The Mill on the Floss, view the city with fear and suspicion. People who live in, or have chosen to move to rural areas, who aren’t bored to tears by the lack of vitality, culture and human diversity, believe the metropolis to be home to anti-social behaviour and violent crime. Yet provincial nightmares like Peckinpah’s Straw Dogs and Hardy’s Wicker Man, toy with the idea that time warped communities camouflage the most dangerous individuals: people unchecked by the civilising tendency that underpins more complexed societies.

Jeremy Lovering’s In Fear is an iteration of this urban nightmare. It plonks a newly minted middle class couple with a breezy air of social sophistication into a cultural necropolis populated by degenerates and sadists. Naturally this is the Irish countryside. We’re alerted to the danger from the outset, as the female half sits in a pub toilet, unaware she’s been spied upon, while her man later reports tussling with a group over that classic collision of man and beast, the spilt pint. This watering hole, then, is your archetypical town and country nexus:  a place where outsiders are marked and victims chosen. We know it can’t end well, nor does it: the couple’s ill-fated drive through the gloaming, under a canopy of bare trees, a precursor to intimidation and violence.

Lovering’s is a tale told with great economy. From a simple setup, a couple trapped in a maze of unfamiliar country roads searching for an elusive hotel, he layers panic and unease with great efficiency. Once it’s apparent the duo are being stalked by person or persons unknown, the eponymous fear is palpable. This isn’t just a good couple of performances but great technique; Iain De Caestecker and Alice Englert as ignorant of what’s to come as their characters thanks to the director’s canny insight that genuine surprise cuts through to an audience and puts its manufactured counterpart in the shade.

Once the incident ratchets up and autumnal twilight becomes darkness, Lovering shows his hand; the film segueing into an exploration of how violence begets violence. That the relationship between Tom and Lucy is new and untested holds great significance. Lovering uses the weak bond between them as a neat metaphor for the thin veneer of civilisation they personify. It is, he suggests, a bond and a cover that’s easily broken, and it’s here, in this echo of Straw Dogs, that the urbanite’s worst fears are realised – not the notion that the countryside is full of yokels who fellate bulls, sodomise their kids and eat human flesh, but that all that truly separates us from them is conspicuous consumption and economic self-interest. Once this affected lifestyle is stripped away, in extremis, any of us are capable of anything. It’s a sobering thought, well formed by a suspenseful movie, that makes the case for getting away from it all just that little bit more challenging.