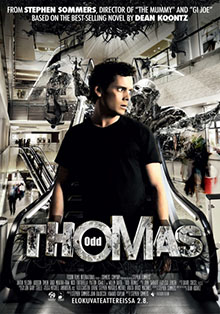 If reports are to be believed, writer Dean Koontz was delighted when he learned that Stephen Sommers would be adapting his 2003 novel about a short-order cook who sees the dead and uses this cheat to finger their killers, presumably passing it off as intuition. Koontz no doubt sensed franchise potential and the pay days to come, so shrewdly didn’t dissent from the choice, despite Sommers’ well-earned reputation as a hack. Maybe he hasn’t seen the first two Mummy movies, Van Helsing or G.I Joe: The Rise of Cobra, but those that have will approach Odd Thomas as they would a bucket of vomit. In this they’d be justified. The director’s latest is a one stop shop for those wishing to catalogue his failings: it’s as subtle as an endoscopy, awash with cartoonish CGI, broad, one dimensional and confected. The only truly odd thing about it is that each creative decision passed without comment.

I haven’t read Koontz’s novel and it’s now likely I never will, but it’s listed as a thriller, an epithet no one will apply to Sommers’ adaptation. The borrowed plot, reminiscent of Peter Jackson’s The Frighteners, promises a mash up of pulp detective story and supernatural chiller, but in the clumsy hands of Sommers the result is an affected, self-consciously kooky film – curiously monotone from start to finish. Earnest performances, registering well outside the recognised spectrum of human emotions, attest to a movie that reaches for quirkiness but overshoots like an abstinence lapsing ejaculateer.

No couple have ever spoken as Anton Yelchin and Addison Timlin do. Many of their scenes are unwatchable. Timlin’s on-going struggle with pitch and inflection rehabilitates Sofia Coppola’s performance in The Godfather Part III. Perhaps only a man christened Odd would choose to love a girl who’d re-named herself Stormy Weather, whereas only an audience reared on the Clubhouse Detectives series, featuring a gaggle of pint sized sleuths, would recognise the tone grafted onto the material. In a scene gifted as shorthand for the whole confused enterprise, a dead-eyed Yelchin barbeques chops on the patio of Willem Defoe’s police chief and declares, “Hell on Earth is coming to Pico Mundo”, adopting the tone of a man asking if the meat needs more glaze.

Perhaps Sommers was aiming for twee and breezy, if only we could ask him, but one wonders if that’s the appropriate register for a film that pivots on multiple murder and a planned terrorist attack. Was this the adaptation Koontz fantasied about when Hollywood came knocking? Is he delighted with the finished product? One day, when he’s finished pulping the remaining books in the series, perhaps we’ll find out.