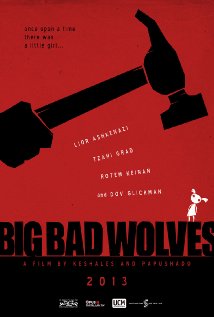 Big Bad Wolves has the distinction of being the last film to play on the historic Empire 1 screen in London’s Leicester Square. The old house is to be remodelled (vandalised) and that’s a great pity, because one would have wanted a movie worthy of this prestigious historical footnote to have been chosen for the occasion. Instead the organisers of FrightFest selected a face palsying grotesque: a tonally schizoid movie about child abduction, rape and murder, notable not for its violence, nor its choice of subject matter – paedophilia being an urgent cultural enquiry for filmmakers, but its bottomless cynicism.

One can imagine the co-writers/directors, Aharon Keshales and Navot Papushado, two teenage boys trapped in mature bodies à la Tom Hanks in Big, sat around a table, laughing long and loud into the night as they plotted this odd fugue of thriller and black comedy; the story of a suspected child killer being kidnapped and tortured by a bent cop and grieving father. This, it turns out, is the worst story conference since The Day the Clown Cried – Jerry Lewis’ infamous and little seen holocaust comedy. Harry Shearer’s review of the same, “this movie is so drastically wrong, its pathos and its comedy are so wildly misplaced” goes double for Big Bad Wolves.

‘Wrong’, it should be noted, isn’t a badge the filmmakers should wear proudly. Wolves is an imbecile’s conception of bad taste. Movies that contravene and challenge boundaries can work wonderfully well; they’re society’s safety valve; but Keshales and Papushado’s treatment of their subject is adolescent minded. What they imagine to be daring is simply flippant. It’s a glib, empty picture.

The problem is tone; that determinant of context that either liberates material or uglifies it. The movie begins much like a conventional thriller, with the abduction of a young girl. Suspicion soon falls upon a local school teacher but there’s not the evidence to charge him. Matters escalate when the body of a decapitated child with underwear around her ankles is found in the woods, and both her father and the investigating officer decide to take the law into their own hands. If this sounds like an odd first act for a black comedy, you have a better ear for tone than the filmmakers. These scenes play out as you’d expect them to – solemnly and with little humour. The odd moment of levity, the cop being interrogated by the police chief and his young son, for example, looks interpolated to lift the gloom, to forestall a descent into suicidal nihilism, but Keshales and Papushado are simply laying the ground for a second act, the tone dial turned to caper, in which the suspected deviant is brutalised for laughs.

It’s an absurd shift; the line of action incongruous with the execution. Was Tommy Wiseau a script consultant? You can believe it in scene after scene that fails to convince either as comedy or drama. It’s little wonder that Keshales and Papushado can’t make it work having failed to decide whether this would be a thriller with a line in mordant wit, in the vein of Tarantino’s Reservoir Dogs – an approach that would have licenced them to trade in recognisable human emotions as well as deadpan jokes – or an out and out black comedy, in which it would be unwise, not to mention uncanny, to attempt to use thriller currency to mine audience discomfort.

Can’t glibness and dramatic meat co-exist in the same piece, you say? Yes, but the trick is to know when to separate them. Keshales and Papushado imagine they can oscillate between gut wrenching dramatic beats and silliness within the same scene. The film keeps you at arm’s length with one curiously artificial moment after another; the torturer’s stereotypical Jewish mother who’s concerned he may be under the weather but seems to have forgotten that his daughter was recently raped and decapitated, the abductee who never seems quite paniced enough about his predicament, as if he knows he’s in a cartoon, the grieving father who’s modelled his shtick on a gangster collecting an unpaid debt – nothing whatsoever rings true. The movie’s world is blunt, sociopathically determined and borderline autistic. That it’s charmless and awkward should consequently be no surprise, yet the finished product was the darling of FrightFest 2013.

I was reminded of what they say about killing your darlings.