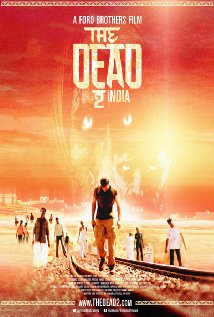 The question that bedevils horror filmmakers the world over is how does one reanimate the zombie movie? With every iteration a second generation copy of the last and every variation tried, reinvention seems further away than ever, yet the desire to add to a bloated and derivative canon remains undiminished for aspiring schlock pedlars.

The Ford brothers, Howard and Jon, thought they’d found a new route in with The Dead; relocating the plague to Africa. On a continent ridden with disease the undead must have seemed like the perfect metaphor; India, a great sequel prospect. The topography allows for travelogue photography while local mainstays like HIV, hepatitis B, dengue fever, tuberculosis, malaria and pneumonia ensure a zombie outbreak’s par for the course, even if the subsequent collapse of civilisation, somewhat integral to the genre, feels less acute in such impoverished environs. Yes, relocating their rear guard action to India must have seemed like an exotic wheeze for the brothers Ford; it would give their film colour and novelty; the only thing that could scupper the film’s ambition would be a banal screenplay, the absence of style and a non-descript lead. What could go wrong?

The Dead 2: India atrophies thanks to a banal screenplay, an absence of style and a non-descript lead. Locations aside, as these constitute little more than window dressing, it’s a movie bereft of ideas. It’s enough, think the Fords, to infect the citizenry and have them shuffle at a speed that would make Romeo’s zombies impatient, toward a bestubbled blank. Said hero, a perma-paniced Joseph Millson, has the distinction of being the only white man on the continent. Why him and not a star from the country’s native film industry, one of the world’s largest? Perhaps the Fords thought a Bollywood actor wouldn’t sell, that their audience couldn’t root for a local, but when you set your movie in a land with a thriving film culture it seems odd to circumvent all that talent and add insult to injury by conspicuously failing to cast any of your own. Indian audiences flocking to see their homeland on screen will be agog at the disposable treatment of their populous at the hands of a seemingly indifferent westerner, flanked by a local supporting cast for whom the term “semi-professional actor” would be an accolade.

When the plague comes, survivors need some kind of impetus; a reason to live – a place to go. The old reliable is a lost relative or lover and the Fords, sticking religiously to the zombie playbook, give Millson an indigenous pregnant girlfriend, awkwardly played by Meenu Mishra, in a desperate bid to drive the story. Unfortunately the page of said book that talks about showing the couple happy together before the outbreak, so one can forge a mental connection between the two and trade on memories of domestic happiness in a bid to empathise with the protagonist, must have been torn out of the Fords’ copy. Millson and Mishra only talk by phone, the latter interrupted by her caste minded, racist father, and consequently it’s nigh on impossible to care whether the couple are reunited or not. That’s a problem because the journey to retrieve her is an uneventful one.

En route to his love Millson makes for a curiously callous hero. Long before he’s established that the infected are incurable, or indeed undead, his first instinct is to brutally murder anyone that chases him. Might he not have immobilised the sick or tried to outrun them (not difficult), showing the kind of human compassion that would make for a vivid and thought provoking contrast with these blood thirsty automatons? Clearly the Fords felt their audience wouldn’t appreciate that, not when there’s pleasure to be had from caving in a skull with a hammer, so imbue their protagonist with the kind of prescience and genre awareness that makes him one with the ghouls in the audience. Any discernible humanity is lost. The movie becomes a zombie.

In a languidly paced affair, in which one inert scene after another is distended with slow motion – the perfect choice for a film featuring a snail-like threat; a bid to impose a semblance of style upon sequences that have none; the only human interest comes from a conversation between Father and daughter. The discussion of their beliefs, in light of the zombie apocalypse, is a juicy aside in a faith based culture, but it’s the only moment in a long and mono dimensional film in which the Fords forsake schlock and consider the real movie that might have been.

Directed by: Howard and Jon Ford