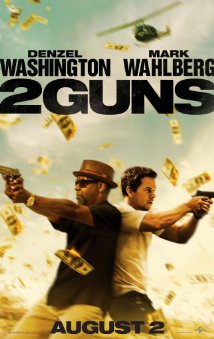 Baltasar Kormákur’s buddy thriller partners Denzel Washington’s trademark intensity with Mark Wahlberg’s trademark torpidity in a bid to alchemise a generic plot about stolen drug money and the undesirables competing to retrieve it. In a café set opener, with both stars waffling over waffles and the like, we’re tipped that all concerned were hoping that W and W would be the new Vincent Vega and Jules Winfield: likeable hired guns that go about their business while making time for antagonising cross talk. This could have worked; they’re a likable pair; but the chat’s laboured, particularly when negotiating its way out of Wahlberg’s barely animate slit, and the jokes are flat. Denzel looks relaxed and sometimes it’s contagious but should he have to carry the movie? Were the others working for deferred salaries?

That it was conceived as a comic actioner is apparent when one learns that Vince Vaughn and Owen Wilson were originally tapped up for the leads. Perhaps that duo might have ad-libbed and injected some humour into the parts of the screenplay with the placeholder mark “[banter]”. Perhaps Kormákur saw The Internship’s rushes and thought twice. In any event this movie needed a few zingers but in two hours the best one liner comes from a man with a barrel to his balls. To laugh at the rest would require the audience to be under the same pressure.

Still no one’s going to argue that 2 Guns was lazy in conception; it’s plotted to within an inch of its life. Following that design, a scheme involving double crosses, duel identities and divided loyalties, requires some concentration, so it’s a regret that Kormákur does so little to hold our attention. The action’s competent but workmanlike, the performances mannered but lacking zip. If the aim of the game was to provide an entertaining diversion, a brief respite from our domestic woes, then it’s mission accomplished but movies that aim for the middle often fall short and this is a thriller that’s conspicuously lacking kineticism and technical bravado. Even reliable firecrackers like Bill Paxton are doused here. It feels like no one knew quite how to put this one over the top.

If Washington’s somewhat languid, perhaps deflated by his uninflected co-star, what of Paula Patton’s female part of the ticket? Is there a meaty, vital role for her in this barrage of bullets and bullshit? Sadly here, writer Blake Masters, who sounds like a ‘70s porn star, exhibits a terminal lack of imagination. Poor Paula’s the designated love interest/damsel in distress and she’s given nothing to do but bare her breasts and get captured. Masters doesn’t believe that women have anything of interest to say, strictly speaking, so contrives to give Patton a mere smattering of dialogue, retaining the important words for her co-stars. Feminoids need not be surprised; the clue was in the double-phallic title.