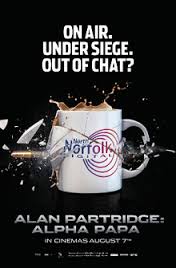 Mid-Morning Matters of Life and Death

Steve Coogan’s burlesque of middling light entertainment personalities, Alan Partridge, has emerged as one of the most durable comic creations of the last twenty years. Begun on radio, promoted to the drool box, where he successfully spoofed inane sports presentation and the chat show, before ending up as the eponymous star of a now classic sitcom, charting his subsequent misfortune and career implosion, the character’s real world success is inversely proportionate to his fictive decline.

Ironicist and admiring fuckwit alike can’t get enough of Alan’s monstrous self-regard, thinly veiled selfishness and crass insensitivity. Consequently the move to the big screen posed a formidable challenge for Coogan and his cabal of writers, including long-time Partridge luminaries Armando Iannucci and Peter Baynham. With a movie comes expectations of scale, of high concept; anathema to the grounded, intimate world of North Norfolk’s mid-morning washout. The good news is that these elephant traps have been side-stepped. Alpha Papa ups Alan’s ante but remains a low-key, parochial affair. Alternatives like Alan Takes Manhattan or Alan in the 25th Century fortunately remain likely fantasies for the character.

That it’s a pared back, siege driven affair is a relief when one reads initial reports of first drafts featuring Al-Qaeda occupying the now defunct BBC Television Centre. Partridge’s currency is the cigarette paper you can place between him and the likes of radio and TV stalwarts like Noel Edmonds (who like Alan is indirectly responsible for killing a member of the public). If the Deal or No Deal presenter’s a tough sell as John McClane, Alan’s just as problematic, so the final set-up, with Partridge as the middle man between the police and the sacked DJ who’s taken his former colleagues hostage at gun point, is welcome; a scenario tailored to both the character’s long-held action fantasies, stoked by one too many Bond movies, and his social indelicacy.

In short, it’s well-conceived and congruent with what’s come before, down to the made for television look, even if Coogan, conscious of the big screen’s larger canvas, has scaled back the aging makeup. It’s about verisimilitude not vanity, we’re informed, though someone should have told the picture researcher who’s included many a still from Alan’s pre-movie days. Why does Alan look ten years younger at a time when Partridge is ten years Coogan’s senior? The answer will have very little to do with staying in character.

The lazy jibe, regularly levelled at Coogan, is that he’s merging with his most famous creation with the advancing years. Much self-deprecating goodness has been milked from that teat in Michael Winterbottom’s Cock and Bull Story and The Trip, but Alpha Papa chalks a clear line of demarcation between the two. Alan’s interest in dowdy radio station employee, Angela, would be greek to Partridge’s progenitor whose glamorous girlfriend is half his age, while the character’s awkward movement, facial tics and air of sublime naffness are a far cry from the confident performer that orchestrates them with such ease. We’d expect Coogan to be able to slip on Partridge like a favourite jumper after so many years but it’s still a pleasure to see character comedy this polished, the makeup aside.

Alpha Papa’s screenplay would have benefited from being just as buff. Though consistently sharp, it’s a script that oscillates between the sublime; moments of acutely crafted comic detail; and the solid. When the former, with poor Sidekick Simon being referred to as such in a police transcript, or the suggestion from Lynn, Alan’s long suffering PA, that he assuage his guilt over the Irishman Pat’s sacking by donating £50 to Sinn Fein, you’re reminded of the quick wit and intelligence that characterises the best of the Partridge canon. When the latter it’s a movie struggling to vault over a very high bar. It is reasonable to expect a daisy chain of shoulder shaking moments? Not across 90 minutes perhaps, but aggregated out the result is a good comedy instead of a great one.

Hollywood take note: this is good comedy that eschews the temptation to be mean spirited. Between the barbs there’s soft affection for the phone-in and power ballad merchants being parodied, as well as a disdain for the corporatisation and subsequent homogenisation of local radio. Community wireless has a value, says Alpha Papa, which given this is a BBC co-production is a message one hopes the partners have taken to heart.

Certificate: 15 for perms, allusions to Silence of the Lambs and Bruno Brookes.