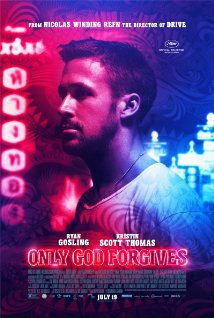 It’s likely that few will enjoy Nicholas Winding Refn’s Drive follow-up. The reasons will have little to do with its artistic merit or the man’s skills as a filmmaker. It’s hard to deride a movie this mesmerising; a film so vivid and hallucinatory; an unbroken mood piece. Don’t believe those that tell you its difficult to watch, the opposite is true, whether you want to or not.

Refn’s taken a two dime plot, a revenge thriller, and reconstituted it as a daisy chain of nightmarish tableaus; scenes that are methodical and punishing, overlaid with pornographic violence. The photography’s as stark as the action: a boxing club saturated in blood red light, a bathroom in mortuary blue. Distended shots are suffused with Cliff Martinez’s electronic pulses. It’s an old fashioned movie that relishes in its own construction: there’s time to study each scene, feel the blows, hear the screams. Unflinching yes, but it’s also great technique.

If Only God Forgives is deficient, it’s in its lack of humanity. This is ornate nihilism. It’s a tit-for-tat world, as the title implies, in which everyone, good and bad, gets punished: a movie utterly shorn of sentiment and trite moralising. It’s the most frightening type of film there is: the one that forces you to think for yourself. Left unaided to wade through the blood and the psychosexual headache that follows, some will abandon it.

Refn gradates the misery: those with redeemable qualities are punished a little less but there’s not much in it. Ryan Gosling, in another near silent role, showcasing Refn’s preference for pure cinema, has been damaged and brutalised by his mother (a malicious Kristin Scott-Thomas); labelled inferior to the spoilt and sexually deviant brother he’s now expected to avenge.

Only God Forgives isn’t a likeable movie; it’s unpleasant and pitiless toward both audience and characters alike; however the craft on display and Refn’s assured handling of his material make it impossible to dismiss. It’s a film with a dark heart but a heart nonetheless.

Certificate: 18 for bad parenting, karaoke and absence of due process.