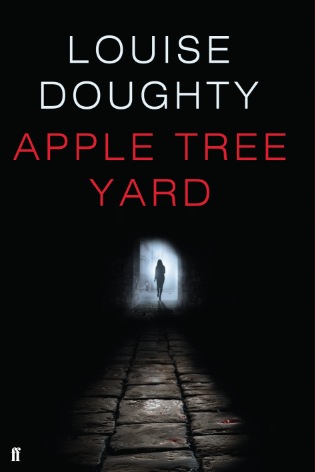 Warning: This review discusses the novel’s plot and reveals its ending. You may wish to read this title before indulging in this generous portion of word dessert.

Find a novelist, take them for a Macchiato, and ask them what’s the first and most important decision they have to make before committing finger to key, and chances are they’ll say “er, point of view?” Point of view is crucial. Get it right, as Nabokov did with Lolita – Humbert Humbert giving a gloriously vain and self-serving account of his perversion in the form of a manuscript, and your story’s got a spine; it can stand tall. Humbert wrote a biography so could indulge in narrative tricks, wordplay and authorial asides. Botched point of view however, draws attention to its own artifice and consequently even a good story with a compelling hook can wilt under the reader’s attentive glare.

Exhibit A, with apology to m’ learned friends, is Apple Tree Yard – Louise Doughty’s tale of extra-marital intercourse, murder and the psychology of joint enterprise, whereby two individuals are said to have colluded to commit a crime. If you were a middle-aged professional feminoid who’d become involved in such a caper how would you rationalise your role? How would you apportion blame? Would you take responsibility or refer to the Myra Hindley playbook, telling anyone who’d listen that you were an unwitting participant, hoping that society, with its helpful preconceptions about men and violent crime, would condition your peers to give you the benefit of the doubt?

One can understand the lure of these questions for Doughty and admire her competence in folding them into a solid yarn, told in flashback, which teases an explanation as to why her anti-heroine and a penis (for he’s scarcely more than that) find themselves in the dock at the Old Bailey. Were this written in the third person the review would be straightforward; a note praising Doughty’s research into Rumpole’s world – the counterweight to the novel’s thin domesticity, an expression of relief that the author had chosen to retreat to an omniscient perspective, as first person narration from her main character, a geneticist, more adept at writing papers than novels, would have been somewhat dry.

But Doughty wants Yvonne Carmichael to be an unreliable narrator. Her first-hand accounts of fracked lust, betrayal, guilt and familial discord are integral to eliciting reader sympathy, not least because said reader’s more likely to be a woman. It’s a confession required to sell the final twist to the patient page turners who’ve become her confidants. Thus Doughty plumbs for the first person. It’s a fateful decision; the equal of her narrator’s first illicit fuck.

Apple Tree Yard is addressed to Yvonne’s lover, a man she’s apparently still infatuated with despite him being outed as a philanderer and fantasist with a penchant for frenzied violence. The account requires the literary suspension of disbelief because though addressed to the nominative determined Mark Costly (Mark Mistake in the 1st draft, perhaps?) it’s not framed as an epistolary account or a dedicated piece of biography, it just is.

The story incorporates letters, or extracts from letters that Yvonne’s written to her lover but by novel’s end it’s clear that the substantive account only exists in the narrator’s mind – “I don’t write anything any more”, which begs the question, is Apple Tree Yard a neurological simulacrum of a novel? And if, by some extraordinary means, the technology existed for Mark to read these memory encoded pages, why is all but half a page preoccupied with telling him things he already knows?

I had a vision of poor Mark, once cock of his walk, free to indulge his appetites as he pleased (without any of the undignified consequences reserved for the fairer sex), rotting in his cell. Suddenly he fits, blood running from his nose, his mind compelled by some unknown force to sync and download this novel from his former lover’s brain.

As a man who had little interest in her private life when they were having sex on the go (a fact acknowledged by the narrator who notes “I suspect you’re not interested in my domestic life” before going on to talk about it at great length), who was so preoccupied in forming an intimate union that he didn’t even impart his name, one imagines he’d be delighted to see his misfortune reconstituted as a therapeutic potboiler; a story preoccupied with the inner life of a woman he probably wishes he’d never met, whose account irritatingly insists on foreshadowing events he’s acutely aware of, using language that mistakes him for a first time reader who’d quickly lose interest if the full details were disclosed from the off.

In fact, poor Mark, the intended recipient of this well-ordered, novel-like stream of consciousness, complete with literary conventions like chapters and chapter breaks – would have to wait until the last page to find a new and significant piece of information, which though unlikely to shorten his sentence, makes the writer’s that much more problematic. Thus Apple Tree Yard is in the odd position of being a novel that could and should, by its own internal logic, be just a paragraph long – a paragraph that might read:

My love, I feel awful that you’re serving a sentence for manslaughter. You killed a man for me, though he was a rapist so I’m unlikely to have lost anyone’s sympathy there. For the longest time we’ve both believed this was something you chose to do of your own free will, but with hindsight I might have wilfully implanted the idea in your head when we were in bed one night. Because you’re a territorial animal, like most men, you acted on my suggestion, unaware that it was my suggestion, in much the same way that Derren Brown uses billboards to make ordinary members of the public commit crimes. So essentially I primed you to kill, I enabled the crime – conflating a hatred of my attacker with an alpha male, chivalric fantasy. Perhaps that makes me a hypocrite for lamenting the flaws in male psychology for so long, I don’t know. I took no responsibility for what you did of course, which is probably why I feel well disposed toward you now, despite you being a duplicitous shit. It’s the guilt I think. Anyway, despite the damage this has done to my family, my career and my health I still hold out for a resumption of our affair once you’re released. With luck you won’t hate me by then because there’s no logical way you can know anything I’ve just told you – after all I haven’t committed it to paper, it’s all in my head.

And the enigma that is human relationships continues…