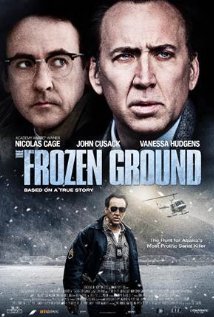 Nicolas Cage in competent movie shock! I’ll let you digest that while we discuss this sombre, no frills thriller depicting the events surrounding the better late than never apprehension of upstanding Anchoragite Robert Hansen, a man who had the distinction of being one of the most prolific serial killers in a nation known for the work ethic of its serial killers.

Between 1971 and ‘83 Hansen, whom you’ll be relieved to learn is played here by John Cusack, with Cage confined to a fictionalised version of the Sergeant charged with proving the case against him, killed at least 17 women, perhaps as many as 30, keeping them captive in his home for up to a week while his wife and family were out of town (which they were a lot on this evidence), raping and torturing them before flying them out to a remote part of Alaska, the eponymous territory, where they were shot and buried. Given the brutality and notoriety of the crimes you’d be inclined to wonder if Cusack was the best choice to inhabit such a role but anyone’s who seen The Paperboy will know the actor’s malevolent credentials which despite the film’s limited exploration of character, can be felt here in just a very few scenes.

If the film’s somewhat cautious approach to dramatising events, with not a great deal of time nor passion spent developing characters, limits its scope and hampers Cusack, whose attempt at betraying the banality of evil occasionally flirts with banality, it’s a boon for Cage whose serious and understated performance, though strictly utilitarian, does nothing to trivalise the material. Would a character actor have added depth to the fictional ‘tech’s back-story and the toll the case takes on his family? You bet, but broad strokes serve to paint the picture nonetheless.

Writer and director Scott Walker (no, not that one), dedicates his film to Hansen’s victims. One can only speculate as to whether they’d have wanted a better game of cat and mouse; this one doesn’t always hang together as well as it might; but they’d undoubtedly be satisfied with the film’s lack of sensationalism and the presence given to Vanessa Hudgens as Cindy Paulson, the one that got away, who transcends mere victim status to become an important part of the story with a share of screen time to match.

Often the film has an inappropriate relationship with cliché – Cage is a few weeks shy of retirement, a ball busting DA threatens to bust his balls if the evidence isn’t immediately forthcoming (why are senior police officers always so intent on hampering the progress of investigations?) and a shot of Poulson watching TV cuts to an old cartoon, which may be the only thing on in movieland, but the investigation is absorbing, the details uncomfortable and the photography washed out, in keeping with the bleak environs.

The parallel story of investigating officer and killer could have been invested with greater tension had the characters been fleshed out and the case’s long history given greater prominence (see Alan Cubitt’s TV serial The Fall for the former and David Fincher’s Zodiac for the latter) but The Frozen Ground manages to remain compelling, despite these shortcomings, thanks to its sober take on some truly extraordinary events.

Certificate: 15 for 50 Cent, hazardous flying and a biblical quote that implies the victims are dumb animals.