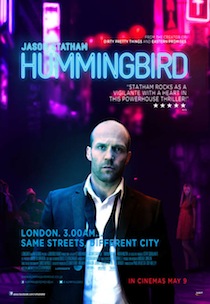 Steven Knight returns to the seedy London of Dirty Pretty Things in this oddball redemption drama. In one of the more unusual entries in the sub-genre of film known as The Jason Statham Movie, the former market trader is cast as a “Crazy” Joe, a PTSD suffering Afghanistan vet who’s on the run from military authorities and living rough in Soho since butchering 5 residents of Helmand Province in retaliation for his felled tank crew.

It isn’t clear when or how Jason escaped or by what means he got from the Middle East to London, but he’s here and following an altercation with some mobsters who run off with his fellow homeless, a young girl, he flees, improbably falling through the skylight of a west end apartment and into several months of free, high-end accommodation.

If you’re going to drop into an empty flat, let it be a luxury pad where the owner’s on business in New York for 8 months, his unused credit card and pin are still on the matt with the rest of the unopened post, there’s a wardrobe of clothes in your size and you’ve got the keys to a new car in the forecourt. Yes, Jason may be luckiest homeless man in London but he’s too brooding and haunted by his war crimes to realise it. Ordinarily this kind of self-indulgence would test the patience but we can’t dislike Jason, even when he’s a shell shocked slayer of innocents. Knight isn’t taking any chances however, so it isn’t long before Statham’s focused on reinventing himself as a cockney fusion of avenging angel and Robin Hood – looking for the men responsible for his friend’s move into forced Prostitution, and the city boy client that doesn’t treat her too good, while dispensing ill-gotten gains from a Chinese mobster, for whom he’s brutally collecting protection money, to the local mission in order to feed the homeless.

This Good Samaritan act forms the emotional core of this often unusual film in which Statham’s love interest is, er, a meek and mousey Nun, who naturally, like Jason, hides a dark past – in her case the murder of her pervert gym instructor. It’s a relationship that’s doomed to fail, you tell yourself, and not just because Stath and Agata Busek are the least likely pairing in screen history.

If you can get past the idea that a local Nun would fall into bed with a former solider-cum-mobster, you’ll be defeated by the total absence of chemistry between the leads. It’s a sweet relationship, a meeting of tortured opposites, and Knight deserves some credit for taking a chance and not casting an actress who’s obviously and obnoxiously glamorous, but the suspension of disbelief required for it to work is too much for audiences schooled in the basics of human biological attraction.

Curious though it is and overly reliant, in keeping with its ever so slightly heightened take on reality, on contrivance (here repackaged as fate) – all roads converging on October 1st – a sombre mood is sustained and an atmosphere created that ensures Hummingbird remains involving. The eponymous avian is a symbol of Jason’s trauma – the name of a surveillance drone that doubles as a call back to the death of his fellow grunts, and like most of the elements here – violence, sex, emotional fallout – it’s used sparingly. It amounts to a film that’s compelling, if never entirely convincing.