Film Review: The Look of Love 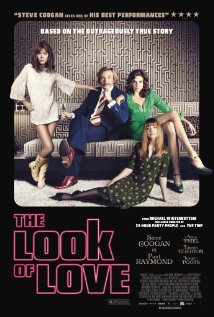 Michael Winterbottom’s biopic of Soho sleaze baron, nipple peddler and purveyor of pubic triangles, Paul Raymond, documents the West London district during the 1970s and early 80s, a period when gentrification of a rather different kind saw the area’s clubs stocked with drooling perverts, my Uncle and Father amongst them, tempted by Raymond’s titillating revues. As the pornographer shrewdly observes early on in Winterbottom’s recounting, sharing the secret of his success with a grub street hack while affected with Alan Partridge’s mannerisms, “I realised that people liked to look at women and liked it even better if they had no clothes on”. It’s hard to argue with a business model that sound.

Raymond, real name Geoffrey Quinn (it’s a testament to his lack of imagination that he didn’t do the obvious and just join those two n’s), liked to look at women rather a lot, so it’s no real surprise that The Look of Love is, above all else, the story of this man’s relationship with the fairer sex; his wife, played with a certain moral laxity by Anna Friel, who tolerated Raymond’s affairs on the strict understanding she remained head fuck (she didn’t), his girlfriend, unchaste showgirl and later, Men Only sex columnist, Fiona Richmond, delectably reborn in the form of Tamsin Egerton, and doomed Daddy’s girl, Debbie, played with moving fragility by Imogen Poots.

It’s the father-daughter relationship that grabs, as Winterbottom explores the paradox that a man who made a fortune monetising his libido, an arrangement that made any durable and trusting union with a woman impossible, was closest to the one he made himself. The unedifying spectacle is cut with sadness. For this Daddy’s girl, having Raymond as a Father acted as a snare that ultimately killed any ambitions she may have had and put her on a path to an early grave. When Tony Power, editor of Raymond’s wank rag, Men Only, introduces Debbie to cocaine, we’re struck by the masturbation monger’s refreshing lack of hypocrisy, “make sure you get the good stuff”, but there, in that pragmatic, principle-free exchange, is Raymond’s tragedy; he lived the low-rent fantasy he sold to millions, oblivious to or indifferent toward its ruinous effect on the by-products of his most important ejaculations.

Coogan’s wears these failed human characters like his favourite brand of condom but can’t help fill them with cheese: that trademark waft of comic grotesquery that he even managed to give himself in Winterbottom’s The Trip. Consequently his casting undermines the veracity of the piece. There are moments of high emotion in this story but Coogan can’t sell them with anything like Raymond’s confidence. What does cut through is a sense of the character’s imagined values; Raymond the vulgarian, whose materialism – personalised number plates, penthouse designed by Ringo Starr, invites us to consider an old cliché that coincidentally was also restyled by The Beatles, “money can’t buy me love”.

That Raymond craved affection but didn’t know how to earn it like one of his “normal” punters is the movie’s persuasive thesis. The character and substance of love seems as far removed from his understanding as Mary Whitehouse. Here it’s for sale, much like the sex. Winterbottom plays Freud, giving us just enough bio – an absent father, catholic guilt and a prudish mother, upon which to hang a retarded sexuality and philandering temperament.

Consequently The Look of Love, for all the flesh and threesomes on display (though as ever the penis receives special protection), is a conservative film, gently asserting the primacy of the family as the only institution capable of delivering happy, fulfilled individuals. What Raymond himself would have made of such a conclusion, the evidence of his life being that regardless of the outcome he didn’t believe any such thing, is anyone’s guess.

For Winterbottom however, the ultimate consequence of Raymond abandoning his own brood, like his Father before him, is a broken and lonely man. The film closes with a reprise of an early scene, a tuneless Debbie performing the titular Dusty Springfield track to her adoring Dad. The lyrics, given poignancy by Poots’ tremulous voice, act as a plea for her Father’s love and protection. Raymond listens, unable to process the subtext. A lifetime of watching performances aimed at the groin instead of the heart has done its evil work.

Certificate: 18 for Coogan in wigs, Chris Addison's proximity to a woman's breasts and Matt Lucas.