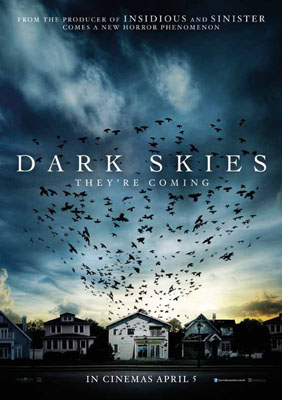 Movies, like people, have a lineage, but few have a line as successful as Poltergeist, the 1982 shocker that saw a painfully average American family besieged by an unwanted houseguest – a spook that targeted the youngest child. A generation on and we keep meeting more of the parent pic’s kids – Sinister, Insidious, Mama, and now the youngest, Dark Skies: a movie that attempts to use the techniques of the humble poet, the elemental equivalent of a metrical substitution, to maintain our interest as we doggedly scan the finished product for signs of life.

Yes, if ghosts are the iamb of the genre, the malevolent alien may be the trochee, or something like it. This isn’t the game changer that magpie Scott Stewart had in mind however, because his E.Ts act a lot like the phantasms they’re subbing for. In fact, Dark Skies is so reminiscent of the movies already mentioned that it could be a test case for copyright law, assuming one of the other siblings had the nous to sue.

It takes more than the crew of a UFO as a USP to make a movie and although Stewart is a competent helmsman, it’s clear from the outset that he has no greater ambition than turning in something that reminds you of something else.

The petrified parents, slow to realise what’s happening, so we can enjoy the motions, go to see the obligatory expert in hope of ideas, who wearily dispels a few alien invasion clichés – conspicuous landing, the toppling of monuments – apparently oblivious to the fact that his very existence is part of a different, though equally virulent set.

The family have experienced visits from The Grays: aliens that pray upon your worst fears, and on this evidence what the fam dreads most of all are ‘home and brood under siege from a malevolent force’ movie conventions.

Their stuff gets rearranged, the aliens make a mess, they steal the family’s things and worse still, get the youngest child in the house to record it all using stick men sketched with crayon. Will these evil forces ever pick on a kid who can draw? I suppose the imperfections, symbolic of a child’s innocent worldview, add to the menace, but seriously, not one child prodigy? When I was a boy, Ben Delap, the class alpha, could doodle with aplomb. He at least would have given the visitors shade and depth – got the proportions right, but in these fucking movies they all make the same pictures. When are we going to see some talent?

The familiar ingredients don’t end there. Dogs and birds are harbingers of doom, the aliens cause injuries that their unwitting prey can’t explain, their invasive surgery induces nosebleeds, wipe memories, and they make an electronic ringing sound that could shake fillings loose. They even have the gall to shine blinding light through windows. In short, there isn’t a single original idea on the table and yet, maybe on the back of all those flicks it reminds you of and which you enjoyed, it just about works. You can believe in this troupe.

Stewart knows that his climax will only pay off if we care for this family and consequently he goes all out to ensure we do. The unfortunate parents get money problems, they have a moribund sex life, Dad and his eldest son are at loggerheads over the boy’s unsuitable best friend, said boy is in the throes of first love and the younger son has serious psychological problems, some of which may even be attributable to the aliens. In other words they get more attention than the inhabitants of these haunted houses sometimes do and if that means having to endure the movie’s trite philosophy, that only by coming together as a working example of one of society’s most troubled institutions, can they defeat the threat, then it’s worth it to spend time with characters whose function isn’t just to look terrified and walk slowly into darkened rooms. If only the same effort had been put into formulating some fresh ideas.