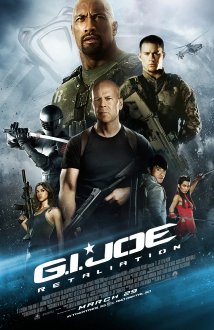 Don’t let audience indifference and some of the worst reviews ever bled from pen to page fool you; Stephen Sommers’ G.I Joe: The Rise of Cobra was an anodyne blockbuster that the world couldn’t bear to see ended. From Dagenham to Dachau the call for seconds was audible – comfortably so, if you took a moment to lean in, thus it’s little surprise that three and half years on, with memories of the first locked in the cobwebbed nook of a million brains, this sequel has arrived, and it’s even better than that because if that original flick was cinematic porridge, part two adds a judicious drop of honey in the form of The Rock (unusual wrestling moniker, Dwayne Johnson) and Bruce “Under the Boardwalk” Willis.

For the small, some would say insignificant, minority that can’t remember how the first slab of Joe ceased, the elite solider unit, borne of a Hasbro toy line (a globally accepted kite mark of quality), defeated Christopher Eccleston’s terrorist organisation and its diabolical scheme to control the world using nano-enchanced grunts. But as any average Joe will tell you, it’s easy to win the battle but lose the war. At the close, a new organisation was born. Cobra, presumably named after George P. Cosmatos’ ‘80s thriller, staring Sylvester Stallone, retaliated by installing master of disguise Zartan in the White House, doppleganging the liberal incumbent.

As Retaliation begins he’s still there and still looking a lot like Jonathan Pryce. When President Zartan abuses his stolen executive power and has the Joes ambushed, Chatum Tatum’s super-solider is blown up. That’s a big mistake, because his best friend, The Rock, gestated in a concrete mixer filled with granite, water and Arnold Schwarzenegger’s stem cells, now swears revenge. The two men were close, we understand, because they frequently played X-Box together and engaged in boy’s own banter while shooting up candles. With this unbreakable bond economically established in just two scenes, we’re as hungry as the big man to see the surviving troupe vanquish their terrorist foes.

If you’re looking to switch off for two hours, perhaps needing time out to contemplate a relationship breakup or how to avoid a fraud indictment, the second G.I Joe (G II Joe, surely?) is simple, unreconstructed, ball fondling fun that takes itself just seriously enough to forestall the collapse into parody. The self-deprecating humour, including what sounds like an in-production bet to place lyrics from Tears for Fears and Queen songs in the mouths of the bad guys, means the film plays like a Bond movie written by Russell T Davis.

If that sounds like the cinematic equivalent of waterboarding, it’s not, thanks to a likable set of heroes, better defined than their 2009 predecessors, plenty of tech-heavy, competently bolted together action and good pacing, ensuring there’s never quite enough time to contemplate what you’re doing.

Given the target audience have barely prominent Adam’s apples, it’s not a surprise to see Adrianne Palicki’s Lady Jayne plastered up as a masturbatory aid. Less welcome is her role as a misogyny receptacle: ironic as the script places kicking against the same as her character’s motivation. Jayne may have proved her reactionary Dad wrong but is she aware that success has put her in the centre of an ogle fest in which she’s frequently patronised and objectified? Probably not but you don’t go to G.I Joe: Retaliation to see the lights behind the eyes, rather the landscape light up and when measured against that yardstick, this is a superior sequel that entertains and amuses in equal measure.

Certificate: 12A for thick necks, one mention of Bono and the victimisation of Britain.