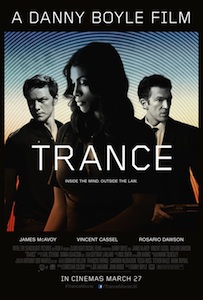 “Do you want to remember or do you want to forget?” That’s the question posed by the shapely (though characteristically shapeless) presence of Rosario Dawson in Danny Boyle’s unusual, puzzle box thriller that part-recalls his best days. The query’s an audacious challenge that pushes past the on-screen addressee and goes straight to an audience whose suspension of disbelief has been tested to destruction over 101 loopy minutes.

Like Boyle’s earliest work, Trance is vivid and daring; with a typically bold visual schema that will, at least for five percent of ticket buyers (if the movie’s statistics hold up), induce a hypnotic effect. Allow yourself to be placated by the dreamy, electro-beats of Underworld’s Rick Smith set to fluid camera movements, dutch angles, low-angles, in fact just about every reality-heightening trick in the filmmaker’s repertoire, and you’re assured of an intoxicating hit of pure cinema straight to the optic nerves. It’s only when you’re up to those same eyes in James McAvoy’s amnesia and the efforts of Dawson’s shrink to clear the blockage, that the less suggestible viewer may experience a sharp snap-back to their coke and cum stained cinema seat. Boyle’s film is barking: the kind of story that could only have been dreamt up under hypnosis.

The movie introduces Goya, the long dead Spanish master who had the foresight to paint the film’s maguffin, such was his genius, as the “first great painter of the human mind”, and it’s this same topography that Boyle attempts to map using the more sophisticated tools at his disposal: ellipsis, nonlinear fragments, hard cuts between different plains of consciousness and last minute lashings of good old fashioned, and in this case wholly necessary, exposition; a final act rug-pull that effectively recasts all the central roles, perhaps unsatisfactorily; hero becoming villain, supporting character turning lead, villain becoming victim; and all, we’re inclined to think, without any of said protagonists becoming the least bit likeable.

There’s no requirement for us to like characters of course; that’s a Hollywood fallacy, but there’s method in their madness. It would help if someone in this opaque picture could endear themselves to us; it inclines you toward greater forgiveness in view of the story’s bat-shit crazy contortions; but Boyle, eschewing his Irish Catholic background and embracing the tenets of Protestantism, expects us to work bloody hard, with the likes of McAvoy, Dawson and a supine Vincent Cassel, mere nuts in the movie’s elaborate machinery.

So what if the lead’s a weedy miscreant, his love interest a lifeless blank and the man between them, a one note hood, says Boyle, look at the movie’s Russian doll-like architecture! It’s got more layers than you’ll find applications of colour in Romanticism’s finest. For some the litany of reveals, carefully foreshadowed, will be enough to convince them that writers Joe Ahearne and classic Boyle collaborator John Hodge have toiled hard to immerse us in the film’s half-remembered world. The rest will eye the lack of spark between the three leads with the kind of suspicion usually reserved for those who prefer their ladies with hairless genitals.

McAvoy’s energetic turn can’t mask the fact that 16 years after Boyle fell out with Ewan McGregor, having foolishly cast Leonardo DiCaprio in his stead on The Beach, he’s never found a leading man of comparable charisma and range to replace him. That the film’s opening voice-over and Scottish brogue induce reveries of Trainspotting, still the director’s one indisputable masterpiece, reminds us that for all the plaudits that have followed, including justifiable praise for successfully hypnotising the British public into believing that the £9b blown on the Olympics was money well spent, Boyle increasingly feels like British Cinema’s one man Oasis: two stellar releases in the mid-nineties that with hindsight look like an artist at the peak of their powers.

Trance may not be Boyle’s best work but it’s nevertheless an ambitious and colourful mind-meld which gleefully undercuts audience expectations while providing a psychological mystery that, though impossible to solve on our own due to flaws in conception, at least puts the brain through its paces while we watch McAvoy’s get turned inside out. He may end the picture as one of the most unsympathetic characters ever to grace a major motion picture, but no matter: sometimes the journey is more fun than the destination and seen this way, the movie’s quite a trip.