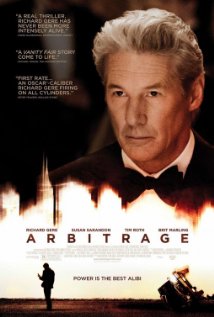 Warning: This review discusses the plot, including the ending. You may wish to defer the pleasure until you’ve seen this title.

The world’s movers and shakers have been operating without an arse since the bottom fell out of the world’s economy. In our hypocrisy we used to turn a blind eye to their cavalier accounting. Times were ripe and we had enough credit to indulge in our more modest materialism. Now the bankers have made us poor and we’re sensitive to their aggressive ambition; their greed; their obduracy in respect of those less fortunate. That’s great news for the movies because it gives filmmakers something socially relevant to talk about for the first time since the 1980s.

Our suspicion that the two per cent of the world’s population that own half its wealth have achieved as much by being economical with the truth, perhaps criminally so, is an effective springboard for a bit of good ol’ fashioned, Columbo-style class warfare. Enter a besuited Richard Gere, cranky ‘tech Tim Roth and Arbitrage – an absorbing character study that teases some vicarious revenge on a perfidious member of the billionaire’s club: colloquially known as “the bastards”.

Gere barely breaks a sweat as cock-sure business brain, Robert Miller; a lucre-worshipping hedge fund manager whom we instantly despise on account of the homespun asides thrown up to the media in a bid to cement his bogus human credentials, “my father welded steel for the Navy and my mother worked at the VA”, and his ostentatious, star struck family: heirs to the empire that act as living monuments to the idea that wealth would have a less deleterious effect on our social fabric were it illegal to inherit.

Gere, it seems, has worked like a Trojan, but you don’t get to that level of excess by being risk averse and selfless. Consequently we’re not surprised to discover that he’s hiding a $412m black hole in his finances, ahead of an attempt to offload his flailing company onto another huckster, while his dutiful wife is advertently playing second fiddle to a dull but generously apportioned French arts curator. “I’m under enormous pressure” he tells his maîtresse, and that’s before he’s had a microsleep at the wheel of her car and killed her in the ensuing collision. Fearful of losing his family and attracting adverse publicity on the eve of an essential deal, Gere recalls his favourite Columbo episodes and abandons the scene of the crime, switching to cover up mode. What follows plays like the man in the mac series, with Tim Roth’s gruff and part-hunched blue collar cop driven to get his man while the suspect pulls out all the stops to keep the wolf from the door.

Nicholas Jarecki’s movie is a timely little (i)morality tale that, though unburdened by the narrative sleight of hand that marked the best of Peter Falk’s investigations, offers plenty of red meat to those kept up at night by questions like, “what drives successful people?” and “what does morality look like in an immoral universe?”. The mechanics of the plot sometimes register as clunky; far better are the exchanges between an increasingly forlorn Gear and stoic spouse, Susan Sarandon, in which both sides of his personality – the proud patriarch and the ruthless pragmatist – are picked over. In a movie of memorable encounters, Gere’s park bench confession to his daughter (now also on the hook for fraud) and his attempts to cajole the kid he’s implicated in the crime, a suitably conflicted Nate Parker, stand out. Tim Roth, somewhat underused, is the dog that seldom sees the rabbit. Perhaps in the real world he wouldn’t get too close to his prey too often but it might have made for better drama if he had.

To Jarecki’s credit Arbitrage, a title that refers to creaming off the difference between market values – the basis of the bad deal that threatens to sink Gere, is never allowed to become a mere ge(n)re movie, complete with the crowd pleasing ending that sends audiences to sleep feeling both morally superior and secure on average earnings. At the close it seems that Gere’s grandest punishment may be the knowledge he’s disappointed his family. A cliffhanger of sorts leaves us with the question of whether the self-made man will sign his fortune to his daughter – lock stock and barrel, knowing that if he doesn’t his wronged wife will go to the police with incriminating testimony, or fight it out in the hope that his purchasing power and moxie will allow him to beat the system. The optimist may see a real character dilemma there. The realist will argue the optimists weren’t watching closely enough.