Film Review: I Give It a Year 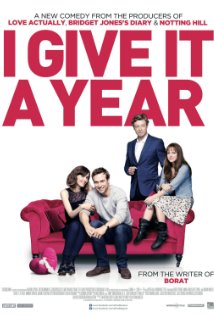 To show that these characters aren’t staid, prissy and anal, as their real world counterparts are thought to be and sometimes are, (after all these movies are at their heart both aspirational and fantasies) they’re permitted to “break out”. They swear, because it’s frightfully rude and daring when a middle class person says fuck, they have sex and talk about it frankly, prompting much embarrassed giggling from patrons too polite or repressed to do the same in their own lives, and they get their hearts broken, and it’s here, finally, that the Richard Curtis universe meets our own, because we’ve all been diminished by someone.

These movies are popular because unlike our own lives, these broken people get put back together again. There’s always *that scene at the end, in which the couple that have struggled to be joined finally find happiness. Often the heavens open, the camera pulls back to a safe distance to allow the lovers some privacy and the score ascends, reaching a crescendo, as though it were cuming at the thought of this common fantasy being realised. It’s a very successful formula but like all templates it soon gets old. How to reinvigorate it while keeping the elements that have proven to be box office gold?

It’s fair to assume that the producers of I Give It a Year wrestled with this question during the flick’s gestation. At first sight it’s business as usual: Ralf Spall is a successful novelist, Rose Byrne a PR executive. They meet, fall in love, have a whirlwind romance and get married, moving into an attractive West London mansion apartment building. The nuptials were expensive. Giant marquees adorn the grounds of what looks like Blenheim Palace, everyone’s drinking good champagne and later the happy couple release balloons with a candle inside, or some nonsense. Yes, it looks like a simpleton’s dream come true, but what’s this? Jokes about fucking child bridesmaids? The suggestion the couple have nothing in common? Those balloons falling to earth and causing a bonfire? Could th- could this be… cynicism?!

Well indeed it is: unrelenting, unabashed cynicism. The new couple are very wrong for each other. We’re instantly alerted to the fact that Spall, a likable idiot with a taste for juvenilia and dry humour, should be with ex-girlfriend Anna Faris, who’s cut from the same soft material. Meanwhile Bryne, an officious, mildly repressed and powder-dry professional type whose thuddingly literal worldview makes Spall’s sense of humour look degenerate and senseless, would be better shackled to Simon Baker’s equally straight-laced business tycoon. So there’s no doubt whatsoever, both sets of alternate couples spend much of the running time fighting their feelings for this forbidden fruit while the matrimonial disaster continues; the unhappy, mismatched spouses determined to make it work out of some misplaced sense of obligation. When the government puts so much emphasis on the importance of marriage, this is the kind of crap that ensues.

Thus you have a romantic comedy that’s been conceived to have it both ways. On the one hand the movie gets to subvert all the cloying, loved-up, “will they or won’t they?”, clichés with a script that offers an alternative take: never mind “will they?”, they did and it’s a disaster. With their largely moribund sex life, hatred of their respective in-laws, fixation on the irritating habits of the other and disdain for their worse-half’s friends, Dan Mazer’s film is in danger of flirting with reality: a no no in the romcom sphere. But on the other hand, the new partners in waiting, who are just the love matches each disillusioned spouse requires, allows Mazer to make hay from relationship failure and the many indignities suffered by singletons, while creating the conditions for the fantasy ending that ticket buying feminoids demand. The journey may be littered with awkward sex, disinterested therapists, toe-curling attempts at wooing and the comedy of social embarrassment but the destination is reassuringly unchanged.

Those more interested in jokes than fairytale denouements may yet be disappointed. I Give It a Year benefits from likable leads and some lip curling situations but the lines are delivered in a smug, knowing, pause for comic effect register, typified by the inclusion of Stephen Merchant; here regurgitating his well-practiced shtick as Spall’s socially retarded best friend. Characters that have no internal monologue can be funny of course but its no substitution for wit or inventive visual comedy, neither of which establishes a foothold. I only wish this review could have had a happier ending.