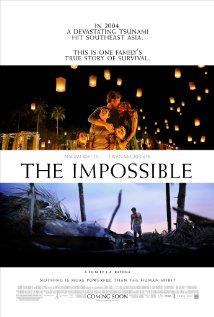 The Prince and Princess of Tides

What does it mean to tell a true story? In movie terms this has always provided filmmakers with a headache because it serves to remind them, and usually us once we’ve eyed the finished product, of the gulf that exists between real human experience, which is messy, unreliable when recalled, thuddingly literal and matter-of-fact, and filmic art, which is meticulous, figurative, manipulative, elliptical and stylised.

Filmmakers must make decisions about their representation of events from the get go, and whereas an imaginary tale is one in which we’re happy to be lied to and bent into shape, as our movie maestros desire, those words, “true story”, prominent in The Impossible from the off, change the dynamic between film and audience. We expect a true story to take precious few liberties with the facts; we expect them, God help us, to be true, or something like it, and we’re acutely conscious of cinematic trickery, because the truth seldom makes it through the film gate unmangled.

The 2004 Boxing Day Tsunami comes early in this account and it’s a triumph of visual and practical effects. The scenes of devastation, of people being swept away, of a tourist resort torn to matchwood, of holidaymakers trapped in eddies of dirty water, vegetation and free floating hazards, are brutal but then nothing beats God’s eye for scale and perspective.

Juan Antonio Bayona sells the moment to us with absolute conviction. Later, when the focus shifts, as it problematically must, to the human fallout, the details remain sharp and discomforting. The water tears the clothing from one of Naomi Watts’ breasts exposing it to her teenage son who, embarrassed, turns his back; a western looking man walks naked along the road side, his immodesty suggesting he’s lost more than his trunks; a truck is piled high with bodies; a fish gulps for air inland. There’s enough of this reportage to give the film weight but Bayona’s determined to make a film in the purest sense, and this is where the material becomes compromised.

Watts and Ewan McGregor provide earnest performances; the kind that actors give while imagining their reflection in a golden statuette, but once you discover that the real world family were Spanish, you’re at a loss to understand why a film pitched as universal felt compelled to anglicise both parents and kids. Boyona’s been coy, suggesting that their national origin remains a mystery, but giving them all English accents tends to give the game away. Perhaps the twin imperatives of international box office and the imagined prejudices of the Anglo-US audience, put pay to the family being reproduced as they were, but it does make you wonder why, given the appalling circumstances the family endured, the moneymen didn’t have more faith in the audience’s ability to empathise with people who looked and sounded like the genuine article? Did they imagine we’d care less about a brood that didn’t speak English?

This misstep introduces an interesting double standard. In a movie that dramatises poor Thai natives coming to the aid of Watts and her son, their decadent tourist idyll having been washed away, and shows great compassion in respect of international characters seeking missing family members, it’s darn right odd that the film had to be anchored by an English and Scottish star rather than character actors; not least because this is a Spanish flick. Both leads are convincing and earn their billing with some moving moments, but the casting adds a layer of conspicuous artifice; Boyona may as well have computer generated his clan.

McGregor and Watts are not the only false notes. Tom Holland, playing the eldest son, shares a scene with Geraldine Chaplin in which the movie’s themes of an improbable afterlife following a cataclysm are allegorised for the benefit of sentimental patrons. Watt’s resurrection from near drowning is kept back to add resonance to her character’s entry into life or death surgery but, with the cover of an anesthetised imagination, it’s rendered as a beautiful but wholly manipulative visual effects sequence in which Naomi enjoys a heavenly ascent to the surface and an emergence that makes you think of Raise the Titanic’s money shot. Time is compressed so that a series of happy coincidences – a child’s need to urinate, a car that won’t start, some acute long range shorts identification – reunite a brood in a matter of seconds, allowing for a monster moment of audience catharsis.

Failure to be moved by any of these techniques might be considered bad form; after all this is a heart rending tale told with great tenderness but it’s also a reminder that the filmmaker’s instinct to reorder, embellish and recast, to maximise the impact to those unfamiliar with the material, can turn the truth into a seductive lie that is less affecting than the events that inspired it. The Impossible has moments of great humanity, with scenes to live long in the memory yet it’s still just a movie. This story demanded a greater push toward realism.

Certificate: 12A for bleeding legs, dead elephants and damage to Thailand's tourist economy.