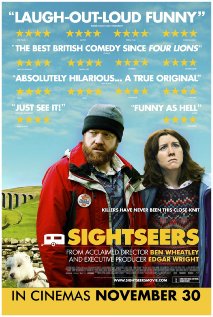 Warning: This review reveals the fate of some characters. You may wish to defer the pleasure until you’ve seen this title.

On the rare occasions that you leave the cinema with something like a post-coital afterglow, it’s likely that form and content were harmonious. I say something like an afterglow because it may just as well be disgust, a sense of feeling grubby; in any case it’s good news because that sensation means that something has been done to you in the preceding couple of hours: Sightseers is such a film. Like Kill List before it, the familiar world is reordered into a new and nightmarish configuration. What Ben Wheatley did for the dinner party he here repeats with the caravan holiday. Jokes are added. The result is something like a heterosexual Carry On film.

In its relationship with its two central characters, Sightseers has a mimetic quality. It’s matter-of-fact, like Chris and Tina, cold in composition and nigh on sociopathic in its uninvolved treatment of each murder. Wheatley’s film only boils over when the happy couple do; the editing becoming more frenzied and the soundtrack trippy, in moments of psychological disorientation. That the tone and the emotional register of the characters are in synch is the closest we get to them. Strictly intrinsic, that is to say, diegetic, or in story clues to their motives and outlook are harder to discern and this is where we’re asked to work as we try to understand how and why a couple of middling holidaymakers with a list of destinations including the Cumberland Pencil Museum, become serial murderers.

For the capricious Chris and his ginger beard, a sure fire signifier of childhood difficulties, the tipping point seems to have been redundancy and a subsequent flair up of hatred and resentment toward the better off and socially cushioned; a noxious cocktail of class envy and persecution complex. It’s when the movie shows its hand, perhaps its masterstroke, and shifts its emphasis from the simple and trusting Tina being driven around Yorkshire by a psychopath, to her being first complicit, then arguably more dangerous; an indiscriminate killer with none of Chris’ pretentions to social reengineering, that his motives become less important and he’s recast as a catalectic force for this murderous new layer to his girlfriend’s character.

By the time we realise that our focus should have been on the downtrodden, dog loving, maternally suffocated frump all along; a woman that thanks to Alice Lowe’s extraordinary blank expression, looks like Jennifer Aniston with an extra chromosome, it’s too late; the movie is over. Chris learns of the extent of Tina’s transformation and the new lease of life/death that it’s given her at the same moment, but it’s too late for him too.

If the psychological makeup of the protag/antagonists is the upside, the one dimensional form of the victims tips the movie into exploitation territory; perhaps what Wheatley and company were aiming for, but a pity in a film that’s invested so much in its principle characters. Chris dismisses his third victim, an officious heritage sight walker, as “a Daily Mail reader”. This being the character’s view, we accept the bias and the simplicity that underpins it but still expect more from the filmmakers. Instead a litterbug, a snob and an amorous hen, tanked on her last night of freedom, all meet with summary execution. A few concessions are made; there’s a distraught family here, a distressed spouse there, enough to acknowledge that the victims are humans, not just common bugbears, but it’s strictly tokenistic. They remain one note and grotesque: part of Wheatley’s scheme in engendering a somewhat uncomfortable relationship between his killers and their judges in the audience.

Fans of deadpan humour will find its purest and in part, most literal distillation here; a movie that delights in its own sadism and a disconnect from the normal pattern of audience sympathies. Whether the nihilism will bear the brunt of repeated viewings is hard to say but once seen, it’s impossible to shake the feeling that something nasty has been excavated: something familiar and abhorrent, that can’t be dismissed as a novel burlesque. I thought of Fred and Rose West, Peter Sutcliffe and Noel Edmonds and reflected that they were probably boring company too.

Certificate: 15 for knitting, filling a wine glass all the way to the top, the countryside and the Cumberland Pencil Museum.