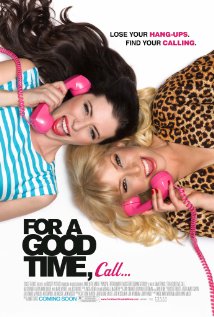 Who said talk was cheap?

For a Good Time, Call… is one of those pleasant surprises sometimes experienced in the cinema when the Gods of Celluloid, reading your attendance as a sign of defeat, take pity and alchemise the material you’d braced yourself to despise, thanks in part to a marketing campaign that pushed your expectations down the stairs.

The hook of having two young, attractive women in a New York apartment making extra cash from a phone sex hotline, is clearly what got Jamie Travis’ film made; that and the decision of Seth Rogen and Kevin Smith to appear in self-pleasuring cameos. One can imagine the discussions on how to sell it began almost immediately. Include a few gross out gags, the suggestion that both women will peel off any unnecessary garments, perhaps even partake in a little lesbianism, as good girlfriends sometimes do, and you could allay the audience’s very real fears that the movie would rely on its two be-breasted leads to be funny. The odds on anyone with a vagina causing your own vaginal simulacrum to upturn at both ends are, so the thinking goes, longer than a porn star’s trench.

I imagine the marketing department, having watched no more than the first ten minutes, didn’t see any reason to revise that initial assessment. On first sight, Lauren and Katy seem like the governesses of movie hell. Lauren’s the prim, uptight one having joyless, mechanical sex with her automaton boyfriend; a self-absorbed preppy type whose groomed pubic region would be improved by a shotgun blast, while Katy’s the loud, slutty one, who exercises by jiggling her tits at the TV and swooping round a pole affixed to her living room floor. When Lauren’s boyfriend dumps her, as he surely must, their mutual friend, that’s the gay one with the cute little dog, suggests they solve each other’s domestic woes, for Lauren’s homeless and Katy can’t afford her rent, by becoming roomies. They hate each other at first of course, because Katy spilt a large cup of her urine over Lauren after a frat party way back, so the stage is set for lots of flat share bitching that can turn to friendship and, we hope, that lesbianism we talked about earlier.

The mad men cut the trailer together salivating at the non-promise of those few scenes, with that all important young male demographic in mind, and consequently the finished preview pushed the promise of crude indulgence to the forefront; that urine spill, Katy gyrating in her underwear, both feminoids in the tub, and so on, but you’d be well advised to do what they didn’t and watch the movie in its entirety. Instead of the tedious gross out comedy punctuated by girlie chat trailed, Travis has made a warm and funny film with two immensely likeable and human leads. Their friendship is sweet without being eye rollingly sentimental, frank without being crude and touching without feeling manipulative. Sure, you can sense the filmmakers’ hands guiding you past some familiar and somewhat predictable plot points but thanks to the natural interplay between Lauren Miller and Ari Graynor, it’s more like a friendly arm draped over your shoulder.

What’s nice, yes nice about For a Good Time, Call… is that despite lines like “do you want me to lick it?” and the presence of two giant manglands engorged on a coffee table during a parental visit, the sex is almost incidental. It’s a fun, nicely judged movie about female friendship that gives us a couple of characters we care about, then stuffs their mouths with witticisms. The mandatory complications are occasionally inventive – watch for the unfortunately named Sugar Lyn Beard’s pintsized employee, while Kevin Smith’s brief contribution sets up one of the best sight gags of the year. For a good time you could do a lot worse… in fact you have.