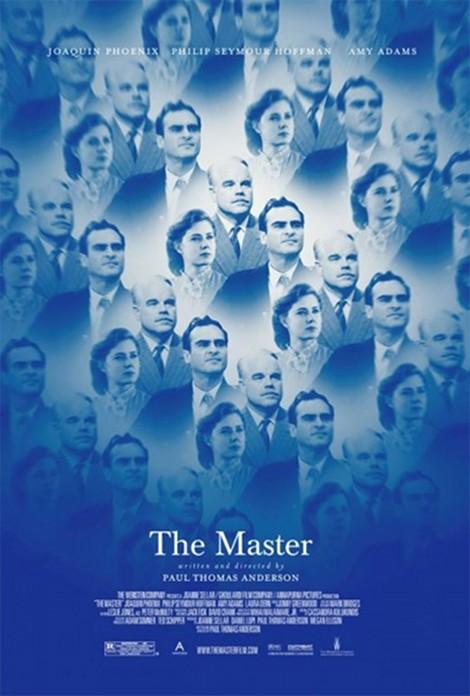 Coyness is understandable. Anderson operates within the only industry to give institutional cover to Hubbard’s nefarious clique. Tom Cruise, the director’s friend and former collaborator famously drank the black sleep a long time ago. The Master then, is a braver piece of work than it may appear; it’s like a critique of clerical fascism smuggled out of wartime Vatican City.

The title invokes cinema’s great mesmerists, Caligari, Mabuse – sinister manipulators, but it’s a film more concerned with the psychological prerequisites for being suggestible rather than the figurehead. With deft strokes, Anderson paints a picture of an individual, Quell, product of a drunken father and mentally-ill mother, who joins the navy, perhaps to belong to something, only to emerge on the other side of the war with a twisted lip, a drink problem and an ungovernable libido. Adjusting to peacetime is tricky: he’s socially dysfunctional and unmoved by the nation’s predominant post-war faith, materialism.

The Master is a psychologically rich movie: a film that excavates without damaging the delicate facades of its characters. Anderson’s a classic filmmaker in the best sense, one who writes without recourse to exposition and directs his actors to communicate with a look or gesture. Consequently an astonishing scene between Phoenix and Seymour Hoffman, in which the former is inducted into The Cause by way of a blink-free interrogation, paints a psychological portrait of Quell that’s electrifying in the subtext.

The scene has its mirror toward the end of the movie, a structure that echoes both sides of the Rorschach test that feckless navy shrinks subject Freddie to upon discharge – a motif that teases out one of the movie’s big themes, that of people projecting their own desires onto an abstract schema – in which Dodd, desperate to hold on to Freddie, once again subjects him to the stranglehold of an intense two hander; the second version telling us rather more about The Master than his subject and what underpins the relationship between the two men. Ultimately the audience is left to tease out the detail in what amounts to a study of two flawed and ostensibly dislikeable characters. Mining our sympathy however, is not Anderson’s game; he wants to understand what’s in it for both parties. We get close to an answer over 143 captivating minutes.

Characters are meticulously layered and brought to life in a series of “unguarded” moments. Quell, as his name suggests, is a ball of barely suppressed rage and discontent. In less assured hands he might have had little more dimension than a thug but Phoenix, in those two handers, in moments of intense feeling – lust and anger – makes him an almost tragic figure; a lost soul who turns to The Cause for reassurance and understanding but finds it wanting. Freddie is simple but headstrong and this proves to be a crucial safeguard as he’s enveloped in the internal politics of Dodd’s retinue; a group that for all its fantastic rhetoric and self-help gubbins is regulated by more old fashioned ideas like sexual jealously, insecurity and hero worship. Dodd, the talismanic leader of the group is assured and silky smooth with his audience but ignites when challenged and in one beautifully judged aside, looks nervous and plagued with self-doubt as he prepares to go on stage and address the burgeoning religion’s first convention.

The gap, between rhetoric and feeling, philosophy and intent, forms the basis of Anderson’s critique of groupthink and its proponents. He marks not just the cult of personality and its character but the hypocrisy upon which it’s built. The canny will see not just an attack on Scientology, with its empty mysticism and sci-fi clichés, but on all organised religion and its vice-like grip on the American imagination. You think of Will Self’s Book of Dave and its satirical observation that the only difference between The New Testament and cab driver bollocks committed to paper is circumstance and a few centuries. “He’s making all this up as he goes along, can’t you see that?” says Dodd’s long-suffering son. Indeed we can but we’re invited to consider why others can’t or perhaps choose not to.

Anderson’s crafted a dense and rewarding film, reminiscent of the best American movies of the 1970s, luminous both in content and in camera, thanks to some sumptuous 65mm photography. Johnny Greenwood’s score, more low key than his There Will Be Blood compositions, adds the requisite menace to flashpoints between The Cause and their latest recruit, while the leads give magnificent, nuanced performances in difficult roles. Amy Adams, as Dodd’s Stepford wife, is also excellent, particularly when eyeing Quell as an interloper between her and her husband. See it: not for God’s sake but for yours.