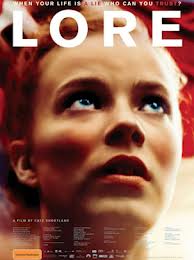 Just when you thought every nook, crag and gorge in the topography of misery that is World War II had been explored, along comes Cate Shortland with this fascinating drama about the children abandoned by senior Nazis as Hitler’s Germany collapsed, its first generation left staring into the abyss.

This is a family rubble film you might say, a spiritual and familial crisis for tots divested of both biological parents and their ideological father, the Führer. Sympathy, not that it’s required, feels like an obligation, but Shortland’s a humane judge, masterminding the denazification of Lore, the teenage head of the family, through bitter experience in the occupied rump of the former Reich.

The staging posts on this enlightenment trip are varnished with retrospective resin – German suicides, a revenge rape victim, news of the holocaust, help from an orphaned Jew – but for that sense of a ordered narrative of post-Hitlerian realisation imposed on what one imagines was chaos and a much slower process of acceptance and rehabilitation, there’s moments of great emotional realism; that sense of life caught in the act that lends weight to the drama, assuaging our irritation with realist clichés like nature signifying naturalism and bursts of soft piano and violin, punctuating an otherwise still and diegetic world, whenever the screenplay commands a little sombre reflection.

Lore’s best described as a travelogue; a journey through the ruin of Nazi ideas. The Reich’s children personify the national tragedy. Many, we’re later reminded, with an eye on the younger siblings, have known nothing but National Socialism and the Führerprinzip. As the movie opens a cutaway from Lore’s father, a senior officer, reveals a soon to be destroyed file – “the law for the prohibition of hereditary diseased offspring”. This isn’t just the obvious counterpoint – a man responsible for the destruction of families now trying to save his own, but one of the film’s less clunking ironies – that this man’s children are, in effect, his own diseased brood – kids that have had passed on to them what Anton Walbrook, in The Life and Death of Colonel Blimp, called “the most devilish idea ever created by a human brain”.

Nothing that follows is quite that succinct, quite so vivid, but Shortland, in early scenes, does capture something of the void left in Hitler’s wake. When Lore’s mother, a wonderfully tremulous Ursina Lardi, says “it is the end”, in a moment of absolute grief and desolation, you see the human face of Germany’s ruin; gangsters and their molls who had a dream they were civilised and liked it, but have now had the rudest of awakenings.

Lore’s ultimate realisation that Nazism is a dead end and that’s she a refugee from a hoodwinked civilisation that threw its lot in with a tyrant in an appalling act of vanity and hubris, positions the titular Teuton as a recovering cultist – a girl who can smash her mother’s china fawn, a polished bit of symbolism, and emerge from a particularly pervasive bit of cultural indoctrination. One suspects the road was longer and harder than that, not least because Lore’s only a little older than the Reich itself, but the journey is sensitively handled; a reminder that not every young victim of Hitler’s struggle was an enemy of the state.