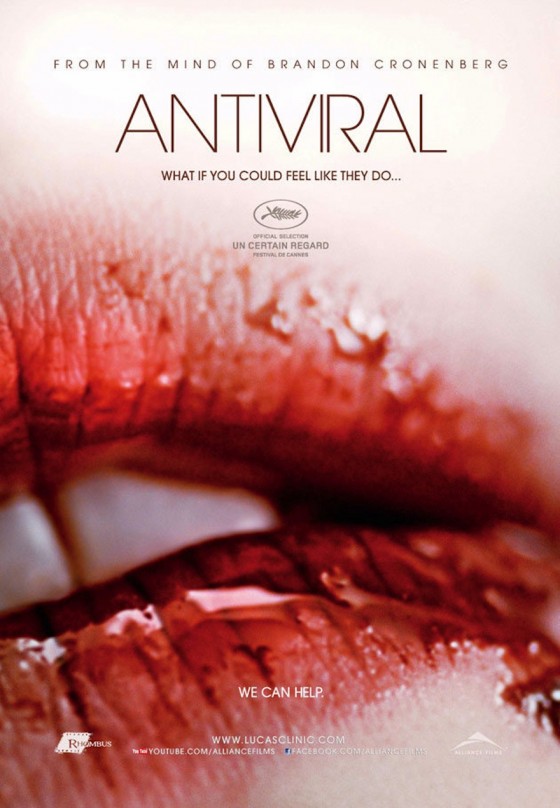 Fans of body horror, that’s decrepitude for kicks, have long celebrated the name Cronenberg. The sequel to his 1986 chiller, The Fly, was memorably tagged “like father, like son”, and what the movies prophesise shall come to pass. Now Brandon, fruit of David, has arrived and he’s inherited Daddy’s sharp eye for the sick, the disquieting – the stuff we’d rather not talk about: like his progenitor, Brandon likes a bad taste burlesque but so do you, so let’s not rush to judgement.

Antiviral satirises celebrity obsession with what could reasonably be called the next illogical step: a looking glass present where our idealised opposites licence their colds, flu bouts and sexually transmitted infections to bio-clinics who sell them on to the fans. Caleb Landry Jones, a pallid technician with an already febrile complexion, smuggles out samples in his blood stream so he can remove the copy protection and sell to the black market. He calls it “biological communion”: reverence, idolatry, the point’s well taken, but the real body and blood is still to come.

If Cronenberg is poking fun at our love affair with the commodified humanoids that grace our magazines, drool boxes, flick parlours and such, that’s just half the joke. The other half is meat grown from the muscle cells of the movie’s glamour puss, Hannah Geist. Watching punters line up to buy a hunk of fresh Hannah; grey, distinctly unpalatable looking stodge; is enough to make a cat laugh. But then cats are far too intelligent to waste their time creating false idols.

Baby Cronenberg’s movie is full of invasive nastiness: the kind of disgust that’s part and parcel of the family business. Retooling themes from his father’s early work, Jones becomes an incubator for a particularly virulent strand of the Geist virus, but this isn’t about our fear of disease, as in The Fly, rather something more; our increasingly unhealthy relationship with the over exposed and underwhelming.

It’s a movie fertile with ideas – it teams with them, like bacteria. The machines that copy protect the viruses give them personalities – an approximation of the human face. These are warped faces, twisted, horrifying faces; the kind of face your ugly obsession might have if, God forbid, the technology existed to personify it. If I tell you the film concludes with a stark piece of vampiric symbolism you won’t be surprised; there could scarcely be a more appropriate ending. A cold and clinical look at our consumer excesses, then – the stuff that’s making us a little less human. It offers little hope for the future but it’s a welcome corrective nonetheless.